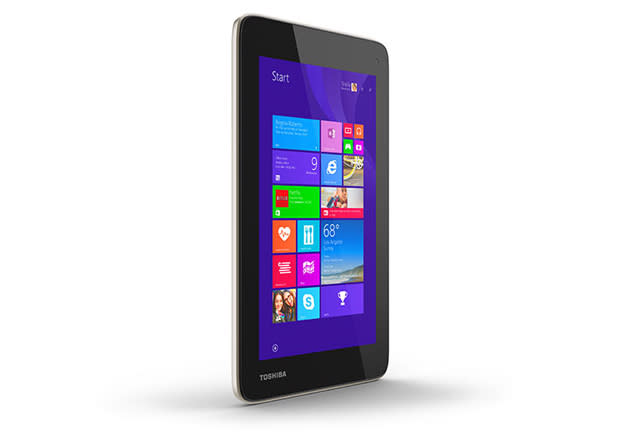 There's no shortage of 8-inch Windows tablets on the market right now, but Microsoft and its partners are pushing ahead with plans to shrink the OS even further. A Redmond executive at Computex has just shown off the Toshiba Encore 7: a 7-inch tablet running full Windows 8.1. If you're thinking that the Windows desktop will be mighty fiddly at this screen size, then you're right -- it's only going to be useful as a Plan B when there's no other way to get into a legacy application, or when you're hooked up to a keyboard, mouse and bigger display. For regular use, you'd be reliant on the more thumb-friendly Metro UI and apps.

The Encore 7 isn't actually the first such device we've seen (Panasonic has a 7-inch Toughpad, and some smaller brands have had a go too), but it's likely to be one of the first to go mainstream, especially if it can score a budget price tag. There's no official pricing or availability yet, but judging from the use of a standard Bay Trail Atom processor, paired with a reported 1GB of RAM and a 1,024 x 600 display resolution, there's nothing to stop the Encore 7 coming in at well under $200. We're hoping to get hands-on with the device shortly, but in the meantime our review of the Encore 8 should give you a flavor of what this thing is like.

In this article: 7-inch, computex2014, encore 7, intel, microsoft, toshiba
All products recommended by Engadget are selected by our editorial team, independent of our parent company. Some of our stories include affiliate links. If you buy something through one of these links, we may earn an affiliate commission.