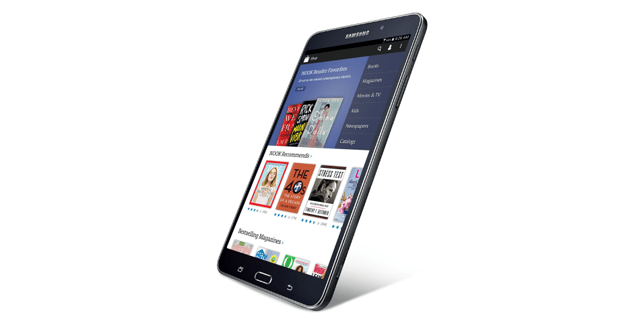 It's no secret that Barnes & Noble has been trying to save money by offloading its tablet development to someone else, but more than a few people expected that "someone" to be Microsoft. Mmm, not quite. The bookseller revealed today that its (first) tablet partner is none other than Samsung, and that the 7-inch Galaxy Tab 4 Nook they've been working on will launch in August.

We're not just looking at a version of Samsung's existing tablet that ships with the Nook app preinstalled, either. BN's statement makes mention of "customized" Nook software, but we're digging further to see what exactly sets this thing apart from the rest of Samsung's wares. What is clear is that this is a savvy move for all parties: Samsung gets yet another avenue through which it can push for global electronics domination, and BN gets a solid (if perhaps unremarkable) tablet that it didn't have to sink gobs of money into. Will it be enough to unseat Amazon's Kindle Fire series, or any other claimants to the reading tablet throne? It seems unlikely, but hell, kudos to Barnes & Noble for taking the shot anyway.

As a reminder, BN hasn't completely given up on selling its own Nook devices -- the existing Nook with GlowLight will still be on offer, though we have to wonder how that might change if this mashup with Samsung takes off. After all, the last time the scrappy bookseller posted its quarterly earnings, it pointed to a nearly 60 percent drop in Nook and Nook accessory sales.

In this article: Barnes and Noble, Galaxy Tab 4 Nook, Nook, Samsung
All products recommended by Engadget are selected by our editorial team, independent of our parent company. Some of our stories include affiliate links. If you buy something through one of these links, we may earn an affiliate commission.