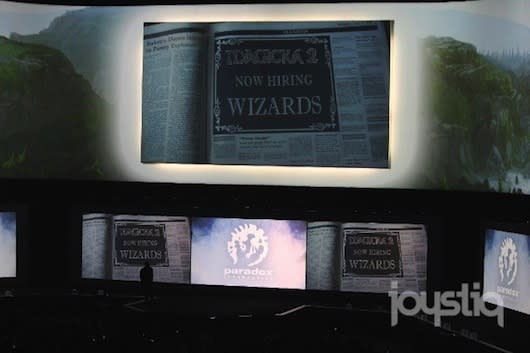 Paradox Interactive is bringing top-down wizardry to PlayStation 4 with Magicka 2. While Sony's E3 trailer adorably painted the life of an unemployed mage, gameplay footage was sparse, as were details on the follow-up to the 2011 co-op adventure.

Update: A fresh press release notes the four-player co-op adventure is coming to PC too. Paradox promises a story campaign and new co-op features, but most importantly, it also shares that trailer with us so that we can share it with you.
Show full PR text
LOS ANGELES - June 9, 2014 - Paradox Interactive today announced that Magicka 2, sequel to the best-selling, award-deserving game Magicka, will be released on PC and the PlayStation®4 computer entertainment system. Magicka 2 will bring the iconic spellcasting system, irreverent humor, and relationship-testing friendly fire into an all-new adventure with up to 4-player co-op. Featuring a story-driven campaign mode, new co-op gameplay features, and plenty of surprises, Magicka 2 will have players casting and blasting together on computers and consoles alike.
In this article: e3-2014, magicka-2, paradox-interactive, sony-e3-2014
All products recommended by Engadget are selected by our editorial team, independent of our parent company. Some of our stories include affiliate links. If you buy something through one of these links, we may earn an affiliate commission.