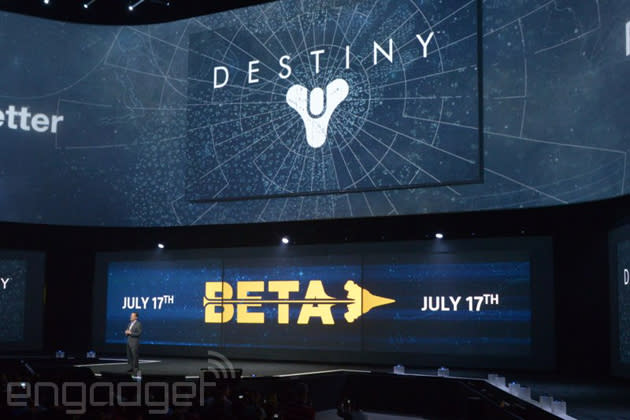 Sony's Andrew House just kicked off the company's E3 show by announcing an open beta for Bungie's Destiny on July 17th. But gamers won't have to wait until later this summer for a crack at the massively multiplayer online title; House also mentioned that the open-world title would be available this Wednesday as an Alpha build for those of you that like works-in-progress. And to make the pot even sweeter for interested parties, Sony's releasing an exclusive bundle that comes with an all-white -- sorry, that's "glacier white" -- PlayStation 4 and free 30-day trial to PS Plus, Sony's network service, on September 9th. So, it's confirmed: Destiny's launch marks the beginning of the many colored PS4s to come.

Update: Activision announced that the Destiny beta will launch on July 23rd for Xbox One and 360 owners, following two days of downtime for maintenance.

In this article: beta, bundle, Destiny, e32014, PlayStation, PlayStation4, PS4, sony, whitePS4
All products recommended by Engadget are selected by our editorial team, independent of our parent company. Some of our stories include affiliate links. If you buy something through one of these links, we may earn an affiliate commission.