Facebook lays out its vision of our communal VR future

Audi made an escape room to promote its E-Tron cars 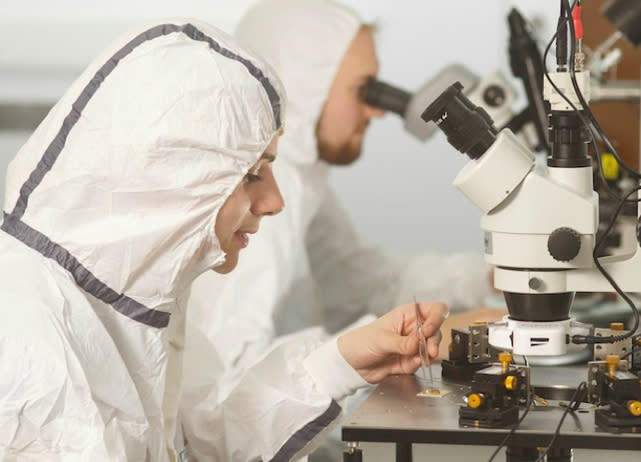 For massive companies like Apple and Samsung, continued success often depends on pioneering new technologies and staying ahead of the curve. Graphene, an ultra-thin and ultra-strong arrangement of carbon atoms is one of the front runners for the category of "next big thing" in tech. A graphene sheet is as thin as a single atom and still retains its electrically conductive and heat dissipating properties, making it a fantastic material for the ever-slimmer world of mobile gadgets.

When it comes to graphene, Samsung has been snatching up patents like crazy, filing over 400 (with some duplicates between regions) with mentions of graphene, worldwide. The filings range from manufacturing processes to methods of applying graphene on different surfaces, but the most interesting patents relate to touchscreens (an image from one touchscreen filing is shown below). If the future of smart devices include flexible screens, graphene would be a fantastic material for such an application, as it's bendable, conductive, and extremely durable. Apple thus far has filed exactly two patents mentioning graphene -- one for a graphene heat dissipation system and one for a "graphene current collector." That's it.

So are we seeing the foundation for a future where Apple pays for the privilege of using patented processes and material applications? Not so fast.

The angle du jour seems to be that Apple and Samsung are in an all-out race for graphene patents, and whoever has the highest number wins. That's a valid, if perhaps a bit shortsighted, way of looking at it. Yes, having patents related to an emerging technology is indeed a good thing, but Apple has never really been a big player in the R&D game at such a basic level.

Apple doesn't need to have a patent on an industrial production method for making graphene in order to use the resulting material in a creative and innovative way. Apple's most valuable patents have always been related to actual products and services. Samsung being ahead of the game on potential graphene touchscreen applications is indeed something the company can stick in its cap, it's not as though Apple has ever had a problem paying a competitor for its manufacturing prowess.

Remember, while mainstream news sites create goofy TV graphics showing Apple and Samsung logos in a boxing ring over the hugely publicized patent disputes, Apple's ultra-powerful mobile chips are still manufactured by Samsung. If Apple were to end up buying graphene sheets from Samsung for use in its mobile devices, it's not a sign of Apple kneeling to its new master. It's business as usual.

In this article: future, graphene, opinion, patents, samsung
All products recommended by Engadget are selected by our editorial team, independent of our parent company. Some of our stories include affiliate links. If you buy something through one of these links, we may earn an affiliate commission.