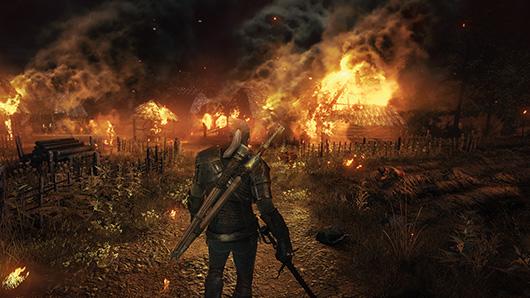 Though the first two Witcher games offered a very convincing dark fantasy, roleplaying experience, too often they forced players to follow a linear, almost claustrophobic path. Not so in The Witcher 3: The Wild Hunt, where climbing to the top of a mountain offers an immense vista populated entirely by locations players can actually visit.

But it's not just the structure of the virtual realm that impresses, as The Witcher 3 is defined by its smaller components: the slick of a puddle lying in the middle of a city street, a murky, methane haze rising from swamplands and mummified bats decorating the home of a magically-inclined crone. "At CD Projekt RED we pride ourselves on our attention to detail," the developers told me during a screening of the game's early moments. "It's all these details and more that make The Witcher 3: The Wild Hunt a true open-world experience."
[Image: CD Projekt RED]

It's this mention of an "open-world experience" that catches my attention, long after I've stopped marveling at the copious blood spray and viscerally satisfying moments, like when a monster catches a sword at just the right angle to lose half its torso.

The hands-off demonstration I watched featured protagonist Geralt of Rivia (the titular "witcher") returning from having killed a gryphon. He rides into town with the beast's head strapped to the haunch of his steed, though this town is unlike most you'll find in any roleplaying game. Instead of existing purely as a location for players to visit, the town has its own schedule, which it follows whether you're present or not. Fishermen return from the sea, nets full of scaly bounty, while merchants haggle in the streets and prostitutes attempt to entice customers with pitiable shrieks more befitting the harpies Geralt regularly dispatches.

As impressively detailed as the town was, it doesn't compare to the sheer scope of this virtual realm. According to CD Projekt RED's developers, it would take hours to explore just that single city, so instead, Geralt rides out of town, to one of the signposts that serves as a fast travel destination. Our next stop on this tour is a decrepit swamp, and while the fast travel system allows Geralt to immediately leap to this new area, the developers claim that, were he to ride there on horseback at a full gallop, it would take 20 minutes of real-time travel.

Once we reach the swamp, the developers begin to demonstrate the tactical uses for their aforementioned attention to detail. In one battle, Geralt slices a nearby beehive in half, causing a swarm of angry airborne bugs to attack everything nearby - in this case, a trio of swamp women who melt into the muck, only to spring up from the soggy ground, claws aimed at Geralt's face. During another encounter, Geralt uses his magical IGNI sigil to throw a gout of flame, only instead of burning his foes directly, this incendiary bolt ignites a floating pocket of green gas, blowing Geralt's enemies into bloody chunks.

Despite these changes, fans of the first two Witcher entries should feel very at home in The Witcher 3: The Wild Hunt. The Inventory, Journal and Map screens are only slight modifications of their prior incarnations, and a familiar list of dialogue options pops up periodically during conversation. Those hoping for an expansion of the game's lore will be pleased to hear that you can drastically alter the course of the game's plot using simple, yellow dialogue options, a helpful addition that prevents players from unwittingly locking themselves into certain storyline paths.

Scant plot details were revealed during today's demonstration, though Geralt appears to be seeking an "ashen-haired woman" of clear importance. In the few glimpses I was granted of this woman, it was revealed that her hair is nearly the same hue as Geralt's, and, most intriguingly, she bears facial scars suspiciously similar to our hero.

The final image presented by CD Projekt RED was a stark black screen, bearing the Witcher logo and a date: February 24, 2015.

In this article: cd-projekt-red, e3-2014, microsoft, pc, playstation, ps4, the-witcher, the-witcher-3, xbox-one
All products recommended by Engadget are selected by our editorial team, independent of our parent company. Some of our stories include affiliate links. If you buy something through one of these links, we may earn an affiliate commission.