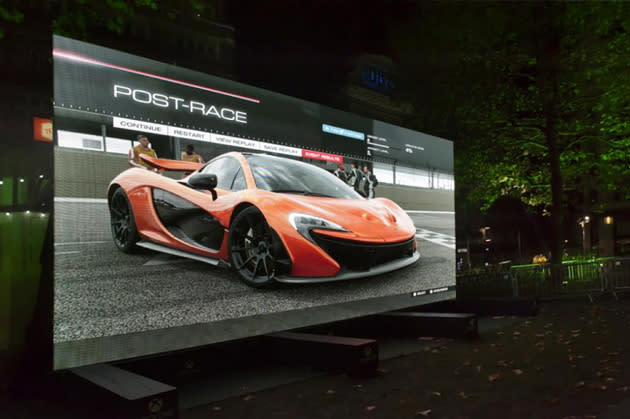 What will Panasonic make of this, then? The Japanese manufacturer's enormous 152-inch 4K set has been superseded by a rival giant -- the "Titan Zeus" -- which is more than four times the size and triple the price. At a cost of £1 million sterling ($1.6 million), the Zeus also promises a full 4K resolution, but this time stretched out across a 370-inch (8m by 5m) panel that is said to be suitable for both indoor and outdoor domestic use. We can't really comment on the design or image quality, however, because there are no photos or video showing the mythologically-confused TV in action. The company tells us this is because its first and only private customer for the Zeus has asked for their installation to be kept confidential. Then again, similar sets from Titan have been widely used at public events (such as the Xbox gathering shown above). You'll also be able to see a second Zeus on show at the Cannes film festival this year, put up by Curb Media in order to display World Cup action at the size of an actual football goal.

In this article: 370-inch, 4k, biggest, hdpostcross, titan, titan zeus, tv, video, zeus
All products recommended by Engadget are selected by our editorial team, independent of our parent company. Some of our stories include affiliate links. If you buy something through one of these links, we may earn an affiliate commission.