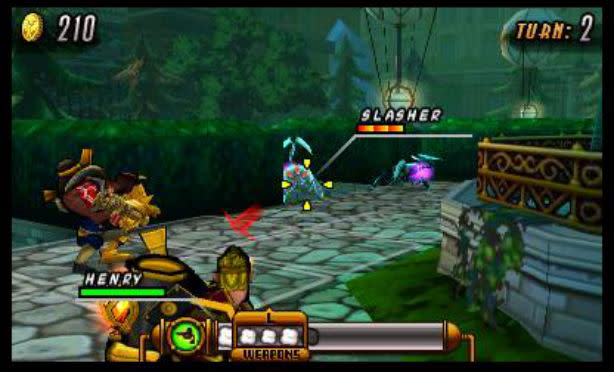 Nintendo's newest IP is a turn-based strategy game for 3DS set in the steam age in London, and has players join an elite force created by Abraham Lincoln to battle an alien invasion. No, really.

It's Code Name: STEAM, it's developed by Intelligent Systems, and it's due out in 2015. Even though it's a turn-based strategy game, it's set up like a third-person shooter: Moving and shooting takes away from your turn points. ​The concept was to make turn-based games accessible and bring the camera down to the level of individual units.

Each fighter in Code Name: STEAM runs on steam – they all have boilers and draw from a set amount of steam to execute attacks. The main characters have animal motifs that impact the designs of their weapons, and some of the original aliens are riffs on Lovecraftian monsters. There's no overhead map – everything is from the perspective of your units. Think steampunk XCOM with real-time elements.

The game is done up in comic book-style art inspired by American artists Jack Kirby and Bruce Timm. Also, "STEAM" stands for "Strike Team Eliminating the Alien Menace."
In this article: 3ds, code-name-steam, e3-2014, nintendo
All products recommended by Engadget are selected by our editorial team, independent of our parent company. Some of our stories include affiliate links. If you buy something through one of these links, we may earn an affiliate commission.