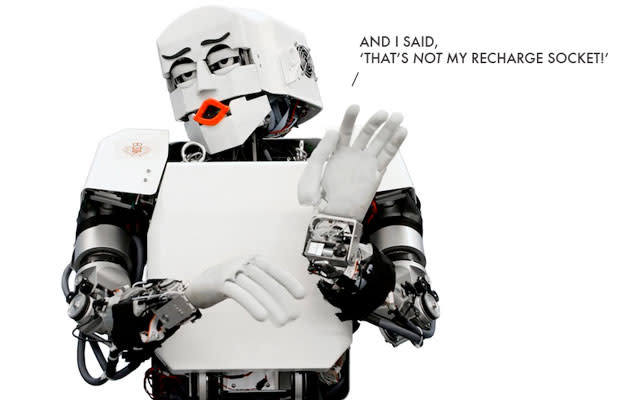 Imagine if, at some point in the future, groups of humans were force-marched down to their local theater to watch Jerry Seindroid or Stewbot Lee say "Hey, so what's the deal with humans, eh?" How would our robotic overloads know what zingy one-liners to crack, in order to keep us amused and distracted? As it turns out, the team behind the KOBIAN Emotional Humanoid robot has spent the last few months writing down the rulebook for robotic comedians. Volunteers were wired up to sensors that monitored their reactions to joke-telling, and the team has concluded that dirty jokes, exaggeration and imitation are some of the more effective way to get a laugh. There's a video showing some of the highlights of KOBIAN's bits, but we should warn you that, thanks to the language barrier, you might not find the jokes funny in the way that they're intended. (Actually, no, they're hilarious.)

In this article: Comedy, Kobian, Robot Comedy, video
All products recommended by Engadget are selected by our editorial team, independent of our parent company. Some of our stories include affiliate links. If you buy something through one of these links, we may earn an affiliate commission.