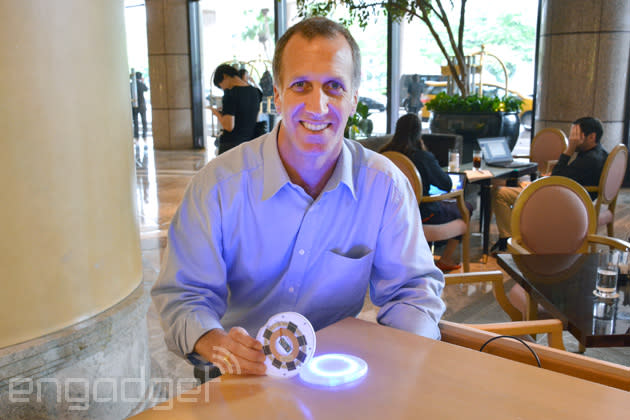 The wireless charging space recently expanded with the introduction of A4WP's Rezence brand, followed by the participation of PC giants, Lenovo and Dell. Now, things are about to get even more interesting as WiTricity and Intel -- both being A4WP board members -- today announced their technology licensing deal. The basic idea is that WiTricity will be implementing its resonance-based charging technology onto future Intel-powered devices, as according to the Rezence specification. Conveniently, WiTricity's newly appointed CEO, Alex Gruzen, is a veteran in the laptop industry, which will no doubt help his new company make a bigger push into the PC space.

The MIT spinoff's technology boasts an efficiency of over 90 percent, and since it's based on magnetic resonance instead of induction, you don't have to place the devices directly on a pad for the power transfer -- they can be placed around the pad, and it even works through various materials like wood and metal. Also, you can charge up multiple devices with a single transmitter, and you can add repeater pads -- which can come in the form of floor mats -- should you require an extended range. In terms of power output, WiTricity already has solutions providing as little power as 10W for portable devices, all the way up to 6kW for cars; and it's prepping for 20kW support for even bigger applications.

"We have been working with a variety of partners across a variety of industries," Gruzen said. "We have great momentum in the automotive space, for example, and Toyota's already announced that the next-generation Prius will have wireless charging with WiTricity's technology." Another example mentioned by the CEO is a helmet kit that draws power wirelessly from a backpack, meaning front-line staff in the emergency services or the military wouldn't have to worry about wires getting in the way. Similarly, protonics can be powered the same way. These are apparently already being tested in the field.

Medical implants is also an area of interest, and we were told that the FDA's already testing a WiTricity-powered heart pump that charges up while the patient's in bed, rather than having to plug a cable into a socket that sticks out of the body (which is a common cause of infection). This will be a few years before the FDA makes the approval, though, but Gruzen reassured that the technology is very safe.

"Everything we're doing operates well below any defined standard around the world, so we're pretty confident," the CEO said. "The first revision has been locked in, we're now in the process of bringing that in front of all the standards bodies to get an agreement on the approach."

This echoes what Gruzen's predecessor, Eric Giler, told us by way of a live demo back at CES 2013. As shown in the above video, the former CEO happily placed his head in between a power source and a receiver, to prove that there's nothing to worry about this dark magic.

"That's about 100 times safer than making a cellphone call," Giler claimed. "It's about the same magnetic intensity as the Earth's magnetic field. So we like to say to people: If you're comfortable living on the Earth, you ought to be comfortable with WiTricity."

With Rezence coming into shape and Intel partnering with WiTricity, Gruzen said we can expect the first WiTricity-powered laptops and tablets to arrive by as early as end of this year, which will help Intel take one step closer to its cable-free future. The exec added that WiTricity-powered cars won't be out until 2015 or 2016, so it'll be interesting to see if other Rezence members can make an earlier arrival in this market.

In this article: a4wp, AlexGruzen, computex2014, EricGiler, featured, features, intel, interview, Rezence, video, wirelesscharging, witricity
All products recommended by Engadget are selected by our editorial team, independent of our parent company. Some of our stories include affiliate links. If you buy something through one of these links, we may earn an affiliate commission.