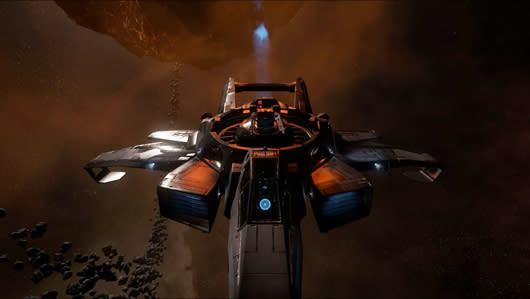 Chris Roberts prefers a joystick or controller to the mouse and keyboard. This came up immediately upon meeting him for our Star Citizen demo/interview at this year's E3. As someone who's mainly watched news on the game from the sidelines, sitting in awe of what looks like a terribly complex title with tons of gameplay options, I was a bit intimidated going into this sit-down. But I came out of it feeling, well, relaxed. So, if it isn't obvious already, space sims aren't my first love. I played a few of them thanks to Star Wars, but having Mark Hamill in Wing Commander wasn't quite enough for me to become a genre fan. So, being handed the controller for Star Citizen was probably painful to watch, at least before I was allowed to use a mouse and keyboard.

The demo is currently rather simple. You launch, you lock missiles onto a target (hopefully not a friendly one!), and fire. Or you can use your guns to take it out. Fight enough waves and you'll get a tougher mob. Do this again and again forever or, as I was told almost every time I ran out of missiles, just eject and get a new ship!

The ship I used was pre-assembled and the controls were fairly basic. Normally you can customize your craft, but the demo emphasizes the shooting a lot more, so both the ship and its controls were relatively simple. If I had wanted to make things more complex, the option was certainly there, but for the most part, I was just flying around killing bad guys. It took awhile to get used to it, though, and it wasn't until a little before Roberts arrived that I realized my ship was kind of drifting, a point he took pride in. For most space games, you're controlling the whole ship. Left goes left, right goes right. However, if you think about car racing games with drift, part of the game is about where power comes from, how it effects different parts of the car, and how that affects the car's movement. Now apply that to ships that have three thrusters on each side. Scale that up to a ship that requires 10 people to pilot it. It sounds like a lot of different parts moving, and it is, but the game sort of simplifies that.

It has a basic idea of what you're trying to do and the thrusters... um, thrust in that fashion. You can get a bit more control over that if you want, but the game helps you out. Roberts explained that he wants people like me, staring in awe from the sidelines, to be able to jump in and play without feeling truly terrified by all the minute details the game has (and it has a lot of attention to detail). At the same time, they want the rocket scientists out there to be able to enjoy themselves, too.

So far, it sounds like it's working. Roberts says that feedback from the recently released Arena Commander module has touched on movement issues quite a bit. There's been a good amount of resistance when people first realize that movement feels different, but after playing with it for awhile, he says, they adjust. And it's true, if I'm any indication, though I'm a novice to the genre so maybe that's why I feel flexible about the issue. Speaking of feedback, I had to ask Roberts what it's like dealing with Star Citizen's vocal community and progressing through the project in such a public way. Even when the team's completely up front about their schedules, like saying date X is possible if there are no problems, people cry foul whenever things don't work perfectly, he explained. He was in good spirits, though, and his explanation was punctuated by laughter.

The rough spots are expected, Roberts said, especially when dealing with the public, but the basic idea is that a lot of players, when they're upset, are upset because they want to play the game. Yes, they gave money and they have expectations, but it's not like they're looking for an immediate return or want the game to ship half-completed, they're just anxious to get their hands on the product they paid for even if it's still being built.

One interesting thing to note is how Roberts asks his team to sort through feedback. If a team member reads feedback that personally resonates, said feedback should be prioritized. On the one hand, you could argue that this allows the team to focus only on their own goals. However, the devs I spoke to were passionate about not only the space sim genre but games in general. I spent a good chunk of time talking to Cloud Imperium staffers about MMOs and horror survival games, and I came away with the feeling that Star Citizen is being made by gamers for gamers.

I'm not currently a Star Citizen backer, so I don't really have a need to talk up the game, but after my demo and chat session, maybe that needs to change.

Massively's on the ground in Los Angeles during the week of June 10-12, bringing you all the best news from E3 2014. We're covering everything from WildStar and Landmark to Skyforge and H1Z1, so stay tuned!
In this article: chris roberts, chris-roberts, chris-roberts-interview, cloud-imperium, cloud-imperium-games, cloud-imperium-interview, con, convention, convention-coverage, crowdfunding, e3, e3-2014, electronic-entertainment-expo, event-coverage, expo, featured, half-feature, internet-spaceships, kickstarter, massively-event-coverage, sandbox, sci-fi, spaceship, star-citizen, star-citizen-demo, star-citizen-e3, star-citizen-hands-on, star-citizen-interview
All products recommended by Engadget are selected by our editorial team, independent of our parent company. Some of our stories include affiliate links. If you buy something through one of these links, we may earn an affiliate commission.