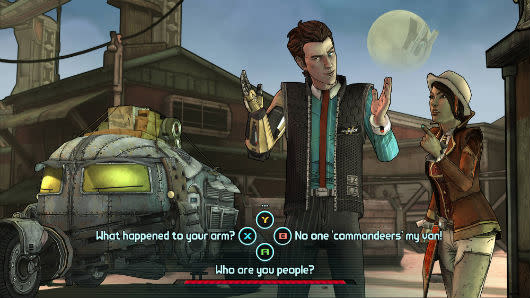 Telltale's The Walking Dead and The Wolf Among Us have much in common. They're both based on comic books, they both feature some fairly bleak situations, and they both start with "The." Tales From the Borderlands, on the other hand, is based on an established video game series, is quite funny, and ... ok, it also has a "the," but it's near the end. It also has two playable characters: Rhys, the tech-using Hyperion employee, and Fiona, the steampunky grifter. After watching the first 30 minutes or so of the first of Tales' five episodes, I talked to Telltale's Richard Iggo about what else is different this time around. (Spoiler: Loot. Lots of loot.)
In this article: android, borderlands, e3-2014, ios, ipad, iphone, microsoft, mobile, pc, playstation, playstation-vita, ps3, recommended, tales-from-the-borderlands, TellTale-Games, vita, xbox
All products recommended by Engadget are selected by our editorial team, independent of our parent company. Some of our stories include affiliate links. If you buy something through one of these links, we may earn an affiliate commission.