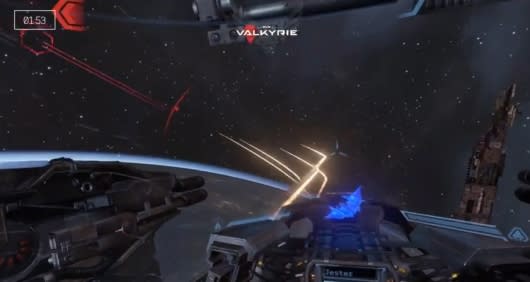 EVE: Valkyrie may still be in the pre-alpha stage, but that doesn't mean that CCP came to E3 empty-handed this year. On the contrary, the studio delivered a gameplay trailer with a couple minutes of in-game footage from the VR space dogfighting sim.

In it, you can see combat between fighters as they use missiles and cannons to engage in aggressive diplomacy. The camera's constant tilting illustrates how the Oculus Rift headset will offer the player an unrestrained field of view during the experience.

Check it out after the break and let us know what you think!

Massively's on the ground in Los Angeles during the week of June 10-12, bringing you all the best news from E3 2014. We're covering everything from WildStar and Landmark to Skyforge and H1Z1, so stay tuned!
In this article: ccp, ccp-games, con, convention, convention-coverage, e3, e3-2014, electronic-entertainment-expo, eve, eve-online, eve-valkyrie, event-coverage, expo, gameplay-footage, gameplay-trailer, internet-spaceships, massively-event-coverage, sandbox, sci-fi, spreadsheets-online, trailer, valkyrie, video
All products recommended by Engadget are selected by our editorial team, independent of our parent company. Some of our stories include affiliate links. If you buy something through one of these links, we may earn an affiliate commission.