On the court with the promising Qlipp tennis sensor

10 high-tech gadgets that will improve your tennis game 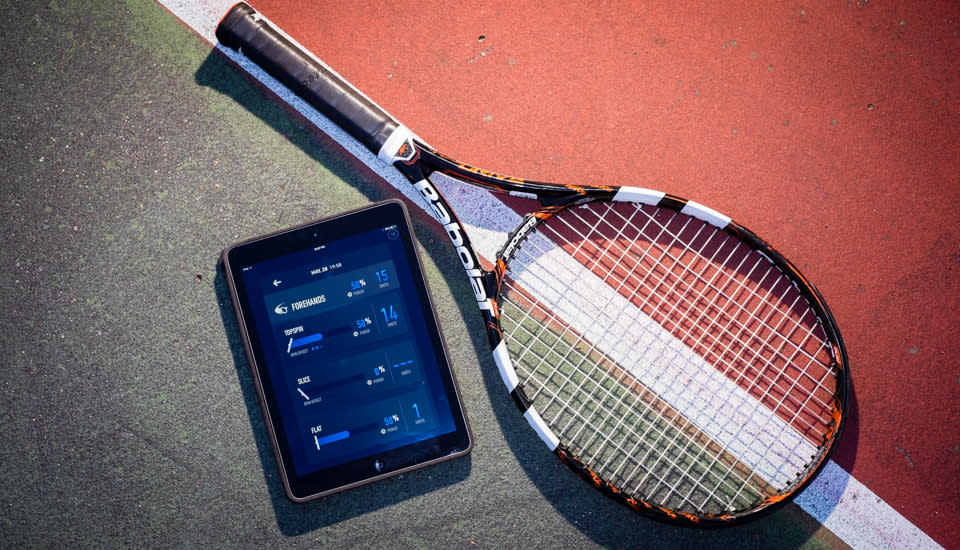 The market for connected, stat-tracking tennis gadgets has blossomed seemingly overnight. Some companies offer motion-sensing, snap-on attachments; others sell fancy racquets with built-in sensors. The French company Babolat is taking the latter route with its pricey but capable Play Pure Drive racquet. I took advantage of Tennis Warehouse's demo program to see if the $400 sensor-laden racquet could help me up my game.

Babolat says the Play Pure Drive feels and plays like its standard Pure Drive racquet, which usually retails for around $190 to $200. While I didn't have one of those handy to compare, I did have my trusty Wilson Six.One 95S on hand. Yes, the Play's 100-square-inch head size is slightly larger than the Six.One's 95 square inches, but the important part is that it does behave like a serious racquet -- not a chintzy, bargain-basement affair with a sensor taped to the bottom.

In fact, as far as balance is concerned, I wouldn't have been able to tell there was a suite of sensors and a Bluetooth module nestled in the handle. About the only thing out of the ordinary was having to charge a tennis racquet. Babolat recommends charging for three hours and rates the racquet for about six to eight hours of runtime.

During my demo period, I recorded about 1,200 shots during solo practices, two-person sessions and informal shotgun matches. Babolat says the Play can identify forehands, backhands, serves and smashes -- all while comparing your strength level to other users and pro-level players. I conducted a quick, 30-shot test to gauge its accuracy with 10 serves, forehands and backhands and the Play was accurate to within one shot. A subsequent 60-shot session showed similar accuracy, though it did count a few serves as overhead smashes, something that may be due more to the informal nature of my practice session versus a more structured match. Impressively, the racquet ignored those small, rapid-fire warm up bounces many do before an actual point begins. It also measures where on the racquet you're hitting and can determine if shots are hit flatly or with spin.

Users can sync play sessions to an iOS or Android app (Windows and Mac users also have access to a web-based client). iPad users like myself can also run the app in 2x Mode, though if you're perusing stats while on the court, it's best to have an internet connection handy -- most of the app's comparison/community features will be unavailable unless you're connected.

Speaking of community, part of the app's appeal lies in the ability to compare and compete with other Play users, including profiles set by Babolat-sponsored pros like Rafael Nadal and Li Na (spoiler alert: Nadal's stats are slightly better than mine). That community competition and the game-like ability to "level-up" as you work on different shots can indeed encourage players to improve. I found myself sneaking in just one more practice session before returning my demo racquet -- I didn't want to end mere percentage points away from leveling up.

Overall, the Babolat Play Pure Drive is a surprisingly robust and capable bit of connected sports equipment. At $400, though, the Play makes sense for those truly serious about improving their games or, perhaps, tennis coaches and academies looking to better monitor students. Hopefully, this is just Babolat's first volley, a preview of things to come. I could imagine an entire line of Play variants of the company's other offerings for those looking for a racquet with a different play style or, fingers crossed, a lower price tag.

In this article: babolat, engadgetirl, irl, tennis, uk-feature
All products recommended by Engadget are selected by our editorial team, independent of our parent company. Some of our stories include affiliate links. If you buy something through one of these links, we may earn an affiliate commission.