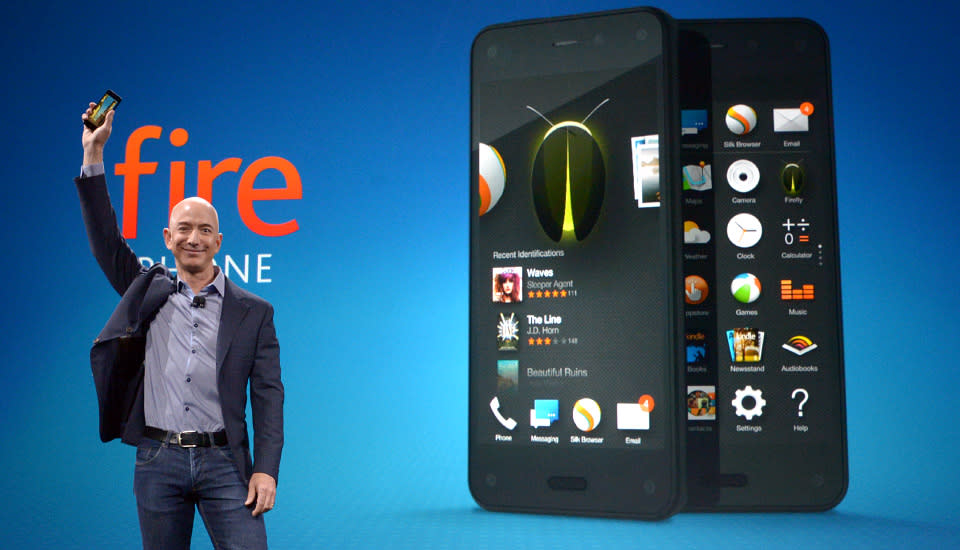 Yep, it's a phone alright. Amazon officially unveiled the Fire today at a special press event held in Seattle. Consistent with the rumors, Amazon's first-ever handset has a 4.7-inch Gorilla Glass display with an HD-resolution screen (720p). That makes it the same size as the Moto X, which was also supposed to be a phone for the masses. It also has a rubberized frame with aluminum buttons, a quad-core 2.2GHz processor, Adreno 330 GPU and 2GB of RAM. As for the camera, there's a 13-megapixel rear-facing one equipped with an f/2.0 lens and optical image stabilization and the ability to capture 1080p video. The phone's display will have 590 nits of brightness, dynamic image contrast and a "circular polarizer," which will likely be used to combat glare. There's also a dedicated camera key and, luckily for all you amateur photogs, it'll come with free unlimited cloud storage for photos as well.

Other features include global LTE and connectivity with nine bands of LTE, quad-band GSM, five bands of UMTS, 802.11ac support, WiFi channel bonding, NFC and Bluetooth. It even supposedly has great battery life, promising nearly 285 hours of standby time, 22 hours of talk time, 65 hours of audio and 11 hours of video playback. It'll be available exclusively from AT&T for $199 if you want the 32GB version, or $299 if you prefer the 64GB. Alternately, you can get the 32GB version for as little as $27 a month or the 64GB for around $31 a month if you opt for AT&T's Next program. If you'd rather go off-contract instead, you can get the phone directly from Amazon for $649 for 32GB and $749 for 64GB. As for sound, the Fire touts dual stereo speakers along with support for virtual Dolby Digital Plus surround sound. It comes with earphones with tangle-free, flat cables plus magnetic earbuds that clasp together. As you might expect, there are a boatload of entertainment-centric features too. There's X-Ray on the phone for second-screen functionality, ASAP (Advanced Streaming and Prediction) support and the ability to fling videos to Miracast devices (like, you know, that Fire TV). Obviously it also supports all of the Prime offerings like Music and Video, plus you'll get Audible, the Kindle Newsstand and Comixology as well.

Stating how it's difficult to use phones these days, CEO Jeff Bezos also announced that Mayday would be coming to the Fire . That's the 24/7, 365-days-a-year live customer service support that the Kindle Fire has as well. Bezos said that Mayday will take less than 15 seconds to answer and will work over 3G/4G as well as WiFi. And, most importantly, it's free.

Here's something new: The Fire will also ship with something called Firefly. It's a feature that uses the phone's camera to recognize books, DVDs, phone numbers, QR codes, CDs, URLs, games, bar codes and more. It also uses the phone's microphone to listen to songs. If it detects an item, you can quickly tap a button to purchase it from Amazon. Firefly can also recognize art. It pulled up a Wikipedia entry for Cornflowers by Sergei Osipov, as well as Man with Red Hat by Vittore Carpaccio. Indeed, it recognizes over a hundred million items, including street signs. It's such a key service to the Fire that there'll even be a dedicated Firefly button.

Saving the best for last, Bezos also announced that the Fire would indeed have a 3D interface. But unlike other 3D phones, that 3D interface will follow you around thanks to Fire's unique head-tracking system that he calls Dynamic Perspective. It uses four cameras to do so, each with a 120-degree field of view and infrared light. They also use a global shutter instead of a rolling shutter.

In a demo on stage, he showed that it changes a picture's view as you move around. You can tilt the phone around and peek underneath blockages on maps, or go forward and backward in a slideshow. It also works in a web browser, à la Smart Scroll on Samsung phones. A small tilt will let it scroll slowly; a larger one will have it scroll faster. The same mechanic also applies to e-books. You can play games by tilting the phone around too.

The Fire runs on Fire OS 3.5, an Android-based operating system that's customized for Amazon. You can either choose to have a carousel-style app grid similar to the Kindle tablets, or a more Android-like look. The carousel version is slightly enhanced from the tablet version -- you'll be able to see the first few emails without having to launch the mail app, and the latest pictures of the camera app. The Music app has a three-panel design that consists of navigation on the left, album art and controls in the middle and lyrics on the right.

Pre-orders start today, and if you hurry, you can take advantage of a limited time introductory offer that includes a year of Prime for free. The Fire will ship on July 25th of this year.

In this article: amazon, amazonfire, amazonphone, amazonphone2014, fire, mobilepostcross, poll, wedgies
All products recommended by Engadget are selected by our editorial team, independent of our parent company. Some of our stories include affiliate links. If you buy something through one of these links, we may earn an affiliate commission.