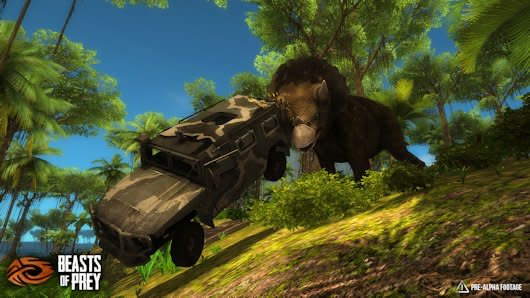 If The Stomping Land and Durango aren't enough to sate your appetite for dinosaur-themed survival MMO gameplay, then here's a third game to add to that growing menu: Beasts of Prey. It's currently in early access alpha on Steam for $34.99, though developer Octagon Interactive hopes to launch beta in October. What does your money pay for right now, exactly?

"Beasts of Prey has been funded privately and your purchase will help us to further develop the game and pay bills for designers/coders & infrastructure. Additionally and more importantly we need your feedback on what we have created so far so we can make the right adjustments to successfully change game-play & mechanics."

The game boasts a single-server infrastructure, a detailed crafting and gathering system, a randomly generated world that adjusts its size based on the population, and dinosaurs that can wreck a camo-colored car much faster than a zombie ever could.

[Thanks to Dengar for the tip!]
In this article: alpha, dinosaur, dinosaurs, durango, octagon-interactive, steam, steam-early-access, survival-mmo, the-stomping-land
All products recommended by Engadget are selected by our editorial team, independent of our parent company. Some of our stories include affiliate links. If you buy something through one of these links, we may earn an affiliate commission.