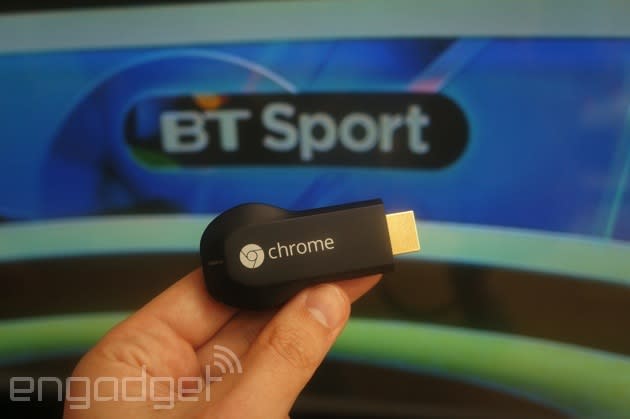 Chromecast users have been able to throw live YouTube broadcasts to Google's streaming stick via their PCs for a bit now, but the search giant recently added a perhaps more convenient way to do that task. Now, you can use your mobile device to push as-they're-happening videos to your flat-screen via Mountain View's HDMI dongle. Pretty neat, right? Google tells us that while the Google+ post is the first time its spoken publicly about the new mobile feature, the functionality soft-launched "a little while ago." The ability could come in handy if you'd like to tune into live-broadcasts via PlayStation 4 this fall, or, in the more immediate future, you can rage along to this year's Electric Daisy Carnival live from Las Vegas. And before you ask, the answer is most definitely no, you don't have enough glow-in-the-dark headbands for Paper Diamond's set at the Sin City EDM festival.

In this article: android, chrome, Chromecast, edm, google, hdpostcross, IOS, LiveStream, mobilepostcross, youtube
All products recommended by Engadget are selected by our editorial team, independent of our parent company. Some of our stories include affiliate links. If you buy something through one of these links, we may earn an affiliate commission.