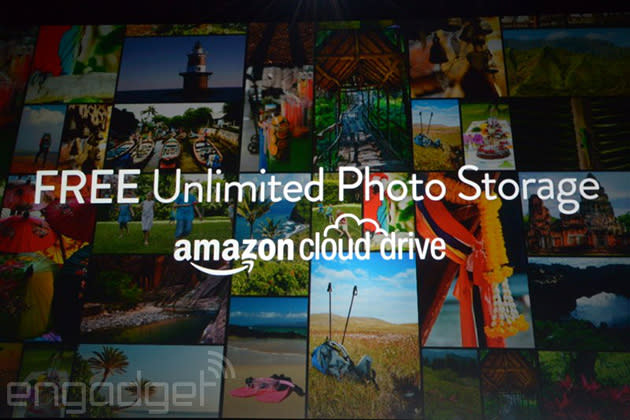 Amazon just announced the much-anticipated Fire phone, and along with some solid display and camera specs, the handset offers unlimited photo storage via Cloud Drive. In an on-stage comparison with the Samsung Galaxy S5 and the iPhone 5s, the Fire's 13-megapixel rear-facing camera looked pretty capable -- especially with low-light performance -- and Amazon clearly thinks you'll be snapping up plenty of pictures. Free, unlimited photo storage definitely sets Amazon apart from Dropbox, Apple's iCloud and Microsoft's OneDrive, among other services, though Google also offers unlimited storage. Follow our liveblog for more news from the event in Seattle.

In this article: amazon, amazon fire phone, amazonfire, amazonphone 2014, cloud drive, fire, fire phone, mobilepostcross, poll, wedgies
All products recommended by Engadget are selected by our editorial team, independent of our parent company. Some of our stories include affiliate links. If you buy something through one of these links, we may earn an affiliate commission.