Fleksy is a snazzy alternative keyboard for iOS 8

Fleksy brings a predictive messaging app to the Gear 2 smartwatch 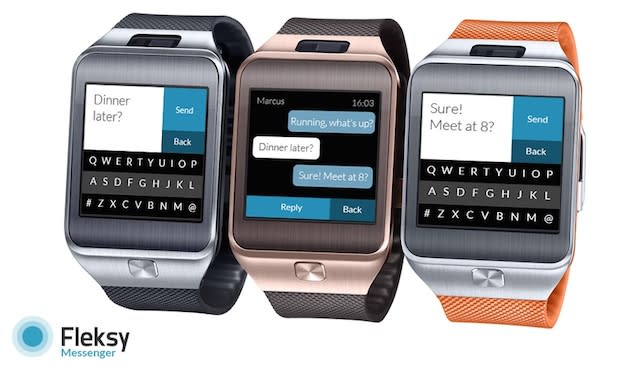 Fleksy's already brought its intuitive touch keyboard to the Galaxy Gear, but now Samsung's smartwatches all run Tizen, it needed an upgrade to operate on the phone maker's own OS. That's exactly what the company has done with the release of a new messaging app for the Gear 2 smartwatch, which delivers a diminutive yet fully-featured predictive keyboard capable of accessing your SMS conversations and contacts. As a dedicated messaging app, it also handles all of the heavy lifting, letting you send and receive messages directly from your wrist. In order to operate, the app syncs with your Samsung smartphone, which Fleksy says "integrates all information from both devices." There's no word on whether you'll be able to load Fleksy Messenger on the original Gear, but it is now available as a free download from Samsung Apps. Hopefully an enterprising developer will port it over.

In this article: fleksy, gear 2, keyboard, mobilepostcross, predictive, samsung, smartwatch, wearable
All products recommended by Engadget are selected by our editorial team, independent of our parent company. Some of our stories include affiliate links. If you buy something through one of these links, we may earn an affiliate commission.