Bacteria open vents in this shirt when you sweat

AI predicts how athletes will react in certain situations

Hexoskin's new wearable is a smart shirt for exercise buffs 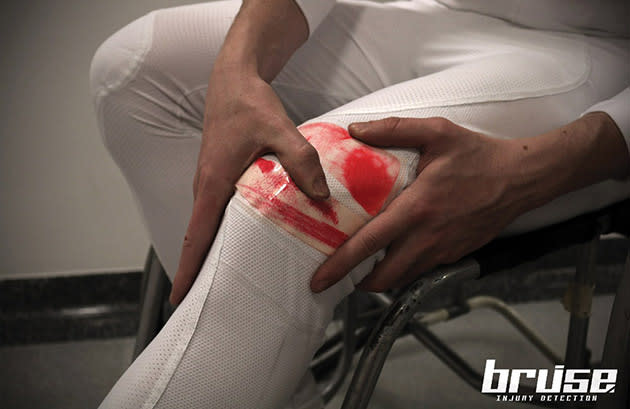 One of the biggest worries paralympians have is sustaining injuries in areas where they won't be able to feel it. After all, if they don't even know they're injured, they might end up bleeding to death. That's why a group of students from London's Imperial College and The Royal College of Art have teamed up to create Bruise pants, which show paralympians where they're injured and how severe it is. The designers sewed pressure-sensitive films made by Fuji onto a pair of Lycra leggings, marking vital points where injuries would be most damaging. In the event that any of those areas sustain impact damage, the film develops a red stain similar to blood seeping through cloth. If the color's showing up as a deep, dark magenta, that means it's time to stop and find the medics.

In order to provide users a guide on how to distinguish minor scrapes from major injuries, the students tested the film out by draping some over animal bones and subjecting them to repeated blows. Their efforts resulted in the current prototype, which is especially useful for athletes who play wheelchair basketball, sit skiing and motor racing (in fact, it just debuted at the Silverstone Circuit). In the future, the developers hope to make a full suit that will be more useful for other sports -- even ones played by able-bodied athletes. As Paralympian Talan Skeels-Piggins (who've worked closely with the students to develop the Bruise pants) told Wired UK:

It could be used by any able-bodied athlete that is involved in activity where blunt force trauma could cause injury. Athletes are renowned for going through the pain barrier, and that also includes training with fractured bones that could either fail catastrophically or cause long term damage to the athlete. In this article: athlete, bruisesuit, health, ImperialCollegeLondon, medical, medicine, paralympics, RoyalCollegeOfArt, sports
All products recommended by Engadget are selected by our editorial team, independent of our parent company. Some of our stories include affiliate links. If you buy something through one of these links, we may earn an affiliate commission.