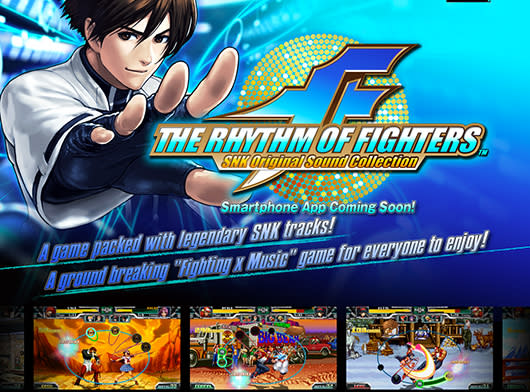 SNK Playmore is transforming its King of Fighters franchise into a mobile rhythm game – dubbed The Rhythm of Fighters – for Android and iOS devicies, the game's official website has revealed. The fighting game/music mashup will launch "soon" on the App Store and via Google Play.

Details on the game are scant, but the site describes the mobile app as a "rhytmaction" title and notes it will be "packed with legendary SNK tracks."

The Rhythm of Fighters is a spinoff of SNK's fighting series The King of Fighters. The series first arrived across arcades in Japan and on Neo Geo and Neo-Geo CD in 1994.
[Image: SNK Playmore]
In this article: android, ios, ipad, iphone, mobile, The-King-of-Fighters, The-Rhythm-of-Fighters
All products recommended by Engadget are selected by our editorial team, independent of our parent company. Some of our stories include affiliate links. If you buy something through one of these links, we may earn an affiliate commission.