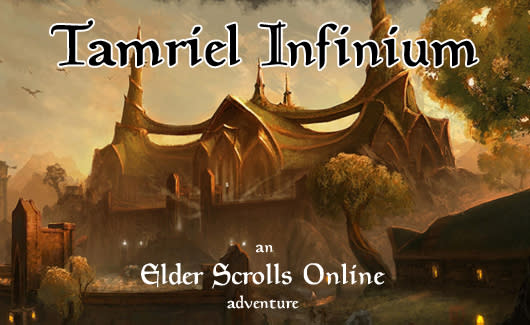 Welcome back to Tamriel Infinium, folks. I'll be your new writer, but don't worry about Larry. He's alive, well, and we're lucky to have him back at the helm of Hyperspace Beacon here on Massively.

I've done plenty of dedicated game columns in the past, but it has been a while, so you'll have to bear with me while I shoot from the hip for a week or three and figure out what's best for this space. One thing I know already is that I dig Elder Scrolls Online, even though that's a pretty unpopular opinion in some quarters. With that in mind, let's poke fun at anti-ESO hipsters after the break, shall we? Do you ever wonder how or why a particular MMO becomes the community whipping boy? Elder Scrolls isn't quite the king of that mountain yet, at least here on Massively and judging by the rancor still running amok in our Star Wars: The Old Republic comments. But ESO has a firm grip on second place. It's one of those titles that everyone has an opinion about, even especially people with little play experience.

This isn't a new phenomenon, either. I spent more than two years writing Massively's Age of Conan column, and I rarely went a day without someone scolding me for doing so. The game was horrible, see. It had failed miserably and I was supposed to feel bad for liking it and kill myself at least twice for writing about it.

Funnily enough, AoC is still failing merrily along in 2014 while its 2008-era competition did actually fail some time ago. My point in bringing that up is two-fold. First, who doesn't enjoy reminding MMO failtrolls of their indisputable incorrectness? Second, and more importantly, is that some people see what they want to see, reality be damned. And unfortunately the internet allows these people to share their delusions with the rest of us.

But look, no sane person is pretending that ESO is bug-free or that its devs have made all the right calls three months into the game's life. As someone who has actually played through the 1 to 50 game and is now getting to see how the other factions live, though, I couldn't be more content when it comes to themepark gameplay.

Well, actually I could -- with a player house -- and that's a rant that I'll most assuredly get to on a different day.

Anyway, who knows. Maybe in the long run ESO will actually fail. Maybe it will go the way of Warhammer or any number of other mismanaged clusterfunks, given enough time. But right now the game is simply not failing, at all, in spite of the fact that you and your 75,000-person guild cancelled your subs and declared it "dead" before crossing it off your MMO to-do list. Nope, sorry, it's still not failing!

ZeniMax just spent a healthy amount of money hyping the game at E3. Failing games -- hell, even most of the successful ones -- can't afford the smallest E3 side booth, let alone a marketing push with a new trailer and a 12-person demo station on the show floor.

I play nightly, and ESO's zones are brimming with peeps. My primary guild is having to turn away applicants, and the last time I wasn't able to get into a PUG dungeon group inside of five minutes was, oh, never. Yes, that's all anecdotal and will continue to be unless ZeniMax disregards the themepark MMO dev rulebook and releases player numbers.

But you don't hear such positive stuff in our comments or on the larger gaming sites that deign to "review" ESO. I wonder why that is? Could it be that some simply want the game to burn? It's possible, though more likely it's the usual internet bullcrappery featuring lots of people with no actual experience amusing themselves by talking out of their butt. Really, though, why would anyone who claims to be an MMO fan want an MMO to fail? Especially one like ESO that, because of the size of its IP and the way that it transcends this niche genre, has the potential to explain to the rest of the gaming world what MMOs can do?

I understand not liking a given game, believe me. WildStar is derivative, butt-ugly, and sophomoric to the point that it screams at me when I level up. But I certainly don't want it going down in flames and making it all the more unlikely for some other studio to spend a ton of money building a AAA MMO!

And I get it, beta testing for consoles and not having an auction house are like the two unpardonable MMO sins, right?

ESO's console beta supposition probably does have some merit. But guess what? If true, that's a net positive. Frankly I hope ZeniMax is using the PC client to stabilize its console releases. That would make good business sense, and it could ultimately lead to a successful, long-lasting MMORPG with a huge install base. Not only that, but the game is fun right now regardless, so I would "pay to test" it for consoles, mobile, the Commodore 64, or anything else.

As for the lack of an AH, yes, boohoo, that makes it completely impossible to enjoy the rest of a sprawling, beautifully realized game world crammed full of content as well as a progression system that steps pretty far outside the usual grindpark box. To be fair, ZeniMax has indeed fallen down on its new content estimates, and maybe most of the associated angst is coming from people who powered their way from 1 to 50 and VR10 inside of a month without listening to a single line of quest dialogue -- you know, the people who kind of whiff at the entire point of playing a fantasy MMORPG. This isn't a competition, bros. Real competitors are playing League of Legends or the beautiful game. Maybe both.

This is a virtual world, which means you live in it. You don't suck it through a straw so fast that it gives you a migraine before you can finish wailing that "there's no endgame content!11!11!"

Finally, when has an MMO studio ever not been tardy on its time estimates? That's why they don't typically announce them aside from generic PR-speak (take note, ZeniMax, and learn to use the word soon). Oh, and spare me Guild Wars 2's Living Story weeklies as an on-time example, please and thank you. I'm talking about real, hand-crafted themepark content that sticks around and has a bit of substance.

Whew. So, welcome to the new Tamriel Infinium. This first installment has been a bit ranty, and I'm not really apologizing for that so much as I'm setting the tone. Elder Scrolls Online isn't a perfect MMO, but it is in fact a damn sight better than the locust crowd would have you believe.

The Elder Scrolls Online might not be a sandbox, but it's a fine Elder Scrolls game in its own right. Join Jef Reahard every two weeks as he journeys to Tamriel and beyond in search of some extra inventory space for his crate, barrel, and bag loot. Or come kill him in Cyrodiil, if you'd rather.
In this article: bethesda, bethesda-softworks, bethsoft, column, content-locusts, elder-game, elder-scrolls, elder-scrolls-online, elder-scrolls-online-rant, elder-scrolls-rant, endgame, eso, featured, locusts, rant, tamriel, tamriel-infinium, tamriel-infinium-jef-reahard, teso, the-elder-scrolls, the-elder-scrolls-online, theres-no-endgame, zenimax, zenimax-online, zenimax-online-studios
All products recommended by Engadget are selected by our editorial team, independent of our parent company. Some of our stories include affiliate links. If you buy something through one of these links, we may earn an affiliate commission.