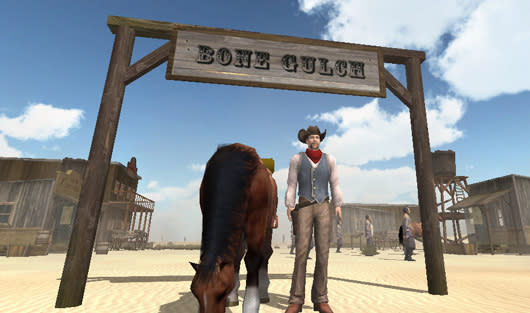 Four years ago I was deep in the throes of Red Dead Redemption's lovely, lusty Old West. I wondered why a sprawling, frontier-based MMO wasn't yet a thing, and sadly I'm still wondering.

Indie company Nesoi Tech apparently shares my affinity for the genre, judging by its new Bone Gulch Kickstarter project. It's a Unity-based sandbox game featuring "an advanced crafting system, a unique bounty system," and "extensive player customization," among other things.

Nesoi's press release also mentions single-player story-based campaigns "in addition to local and online multiplayer action," so we're not quite sure how MMO it is at this point. There's some pre-alpha video footage available, though, and we've embedded it for you after the cut.

In this article: bone-gulch, bone-gulch-video, cowboy-mmo, cowboys, crowdfunding, kickstarter, nesoi, nesoi-tech, old-west, video, western, western-mmo
All products recommended by Engadget are selected by our editorial team, independent of our parent company. Some of our stories include affiliate links. If you buy something through one of these links, we may earn an affiliate commission.