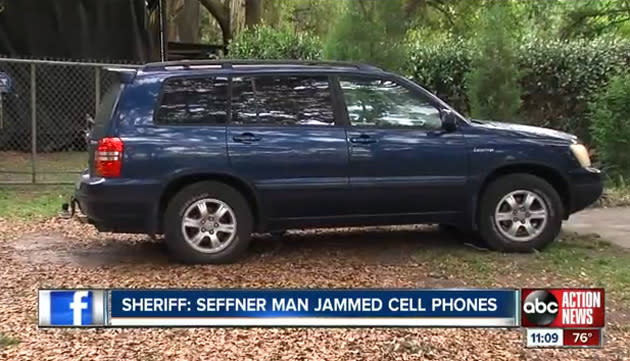 If you happen to notice a second-hand Toyota Highlander being offered for a quick sale in Seffner, Florida, you'll know exactly who it belongs to. A local man, Jason Humphreys, has been given 30 days to pay a $48,000 fine after being caught radio-handed with a high-powered phone jammer hidden under his SUV's front passenger seat. When he was pulled over by a squad of FCC agents and police officers, who had spent days tracking the source of the wideband interference emanating from his vehicle, he reportedly told them that he was "fed up with watching cell phone usage while people were driving." Unfortunately for Humphreys, the state of Florida deems it legal for motorists to engage in phone conversations while they're on the move, whereas it severely frowns on the use of unlicensed jamming equipment that can disrupt vital communications between emergency services. The only glimmer of hope for this grumpy vigilante is if he can write to the FCC and somehow stall the fine, but even then he'll likely still face a separate case raised by an even grumpier Sheriff's office.

In this article: florida, highway, interference, jammer, mobilepostcross, phone jammer, safety, suv, transport, transportation
All products recommended by Engadget are selected by our editorial team, independent of our parent company. Some of our stories include affiliate links. If you buy something through one of these links, we may earn an affiliate commission.