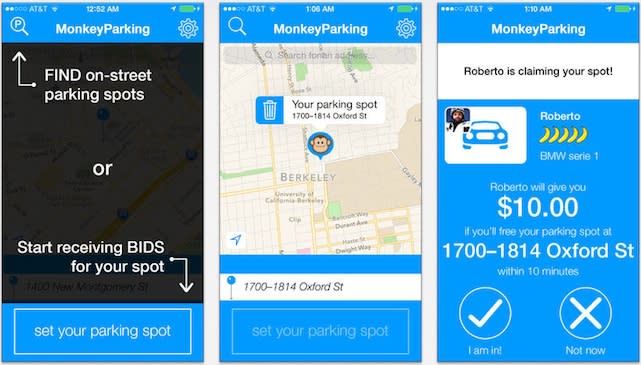 Finding parking in any big city can often be a big, bonafide pain in the arse. One company with an eye towards remedying the problem is MonkeyParking, an Italian-based startup that runs out of San Francisco.

The premise of MonkeyParking is rather simple: Whenever a driver is about to leave a parking spot, he lets users of MonkeyParking now in exchange for money (and the spot). On the other end, drivers who can't find a spot can put out a bid through the app to incentivize drivers of parked cars to make some cash and give up coveted parking spots.

The app description reads in part:

MonkeyParking is the first app which lets you make money every time that you are about to leave your on-street parking spot.

You can use MonkeyParking when you really need a parking spot: just broadcast your bid. It's like "Hey I will pay somebody $5 to leave me the parking spot he is currently using!"

While this service ostensibly seems to have been developed in the vein of similar consumer-facing apps like Uber and TaskRabit, the city of San Francisco is vehemently fighting to get the service and app itself eradicated.

Calling the business illegal, The Wall Street Journal reports that the City Attorney's Office in San Francisco recently sent a cease and desist letter to the company noting that drivers who use the service could face a penalty of $300 for each infraction while MonkeyParking itself would be liable for up to $2500 in fines for each infraction.

So what has the San Francisco attorneys so heated? Well, it's quite simple. They claim that no individual can enter into any type of contract "with or without compensation for the use of any street or sidewalk."

Emblematic of just how serious San Francisco is taking the issue, they've even sent a take down request for the app to Apple's legal department. As of Tuesday morning, the app remains available on the App Store.

Taking a step back, it's easy to see why the powers that be in San Francisco are so concerned. What's to stop a group of friends, or even one person, from occupying a number of spots and staying put until the price of individual bids rises to astronomical levels? While I can appreciate the idea behind MonkeyParking, one of the apps unintended consequences may be to exacerbate an already frustrating problem by artificially increasing the shortage of open parking spots.

Notably, similar apps such as Parkmodo have also drawn the attention of local officials in San Francisco.

Daniel Shifrin, the chief executive of San Francisco-based Parkmodo, told Venture Capital Dispatch that his company has researched the legality of the business model, and that the service is not buying and selling parking spaces. "You can't sell something you don't own," he said.

To which the City's Attorney's Office would likely respond, "Exactly!"

Whereas services like Uber and Airbnb connect individuals with services furnished by private citizens, MonkeyParking does no such thing. If people want to profit off of their own house, apartment, or labor, there's no problem. Similarly, there'd be no problem if MonkeyParking operated without a payment component to the app. But once you start charging a fee (at best) or creating a bidding war (at worst) for information regarding public parking spots, it's hard to make a case that such a service is fair or even beneficial.

In this article: app store, parking
All products recommended by Engadget are selected by our editorial team, independent of our parent company. Some of our stories include affiliate links. If you buy something through one of these links, we may earn an affiliate commission.