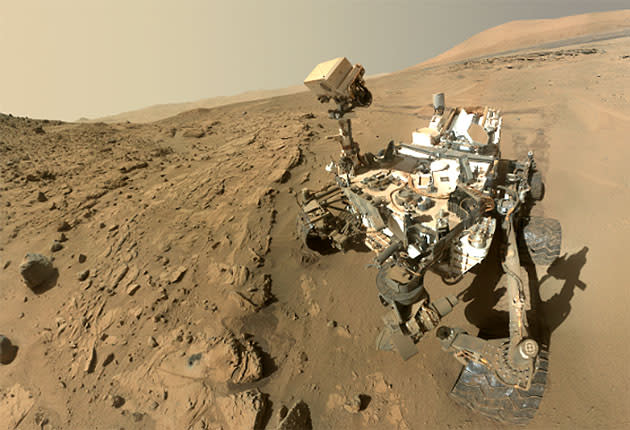 Curiosity feted its first Martian year on the red planet (687 earth days) with a stiched-up selfie while NASA reflected on the Mars rover's triumphs and setbacks. So far, it has achieved most of its mission goals, particularly its quest for evidence that Mars could have supported life. Drilling samples revealed traces of all the elements needed for life, and it spotted a streambed that once had "vigorous" water flow. The rover also found that moisture could be drilled from its soil, and that the radiation levels were safe for humans -- all important details for planned space travel. Unfortunately, due to sharper-than-expected rocks, Curiosity now has a gaping hole in its wheel, which forced the team to change its driving methods and routes. It's not expected to have much impact on the mission, though -- after grabbing samples at a site called Windjana, Curiosity's now headed to Mount Sharp, some 2.4 miles away. With its main goals accomplished, any new science is gravy --- see the video below for more.

In this article: Curiosity, Mars, MartianYear, milestone, NASA, Rover, video
All products recommended by Engadget are selected by our editorial team, independent of our parent company. Some of our stories include affiliate links. If you buy something through one of these links, we may earn an affiliate commission.