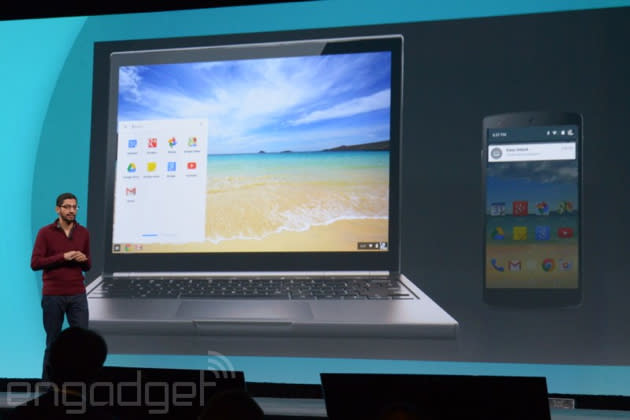 Google I/O wasn't all about Android and wearables. The Mountain View company unveiled more information about Chrome OS, that other Google operating system, as well. The big news? Google is finally bringing Android apps to the Chromebook. Sundar Pichai, Google's Senior VP of Android, Chrome and apps, showed off the Vine Android app on a Chromebook Pixel on stage. As seen in a picture (after the break) different apps work differently, with Flipboard showing up larger, and Vine appearing in a phone-sized window. The apps can access local hardware so you can record a Vine from your Chromebook's camera if you wish. Additionally, when your phone and laptop are connected, a notification will pop up on your Chromebook letting you know if your phone battery is low; there are alerts for incoming calls and text messages too. At last, it seems Google is working to bring Chrome and Android together in a unified experience.

Update: A post on Google+ indicates that the only approved apps right now are Vine, Flipboard and Evernote. Others will need to be added to the list before you can access them on your Chromebook this fall when the feature launches. Want a say in which app is next to make the jump? Nominate your preference on Chromebook.com/newapps to let the team know. In this article: android, apps, chrome, chromebook, chromeos, evernote, flipboard, google, googleio2014, vine
All products recommended by Engadget are selected by our editorial team, independent of our parent company. Some of our stories include affiliate links. If you buy something through one of these links, we may earn an affiliate commission.