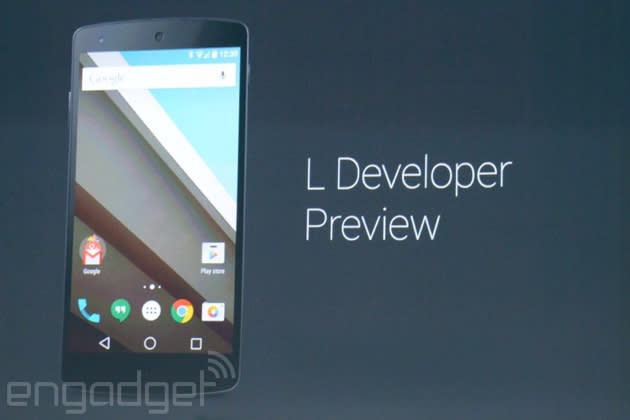 KitKat may have only found its way onto roughly 15 percent of phones at this point, but that won't stop Google from looking to the future. The new version, teased by Sundar Pichai is simply being referred to as the "L" release right now. As previous leaks have indicated, this will be the most dramatic UI overhaul the OS has enjoyed since Ice Cream Sandwich debuted back in 2011. The heart of this overhaul is called Material Design -- a flatter look, with rounder elements and softer edges that will extend beyond tablets and phones to Chrome OS and Google's various web services. You can see some of the new design philosophy at work already in the latest version of the Google+ app on Android. But it goes beyond that. Shapes are simplified and there are smooth transition animations across the UI. And those animations aren't just inside apps; they can also be between apps. For instance, you could view an image in the photo gallery, and then choose to open it in a third-party editor. Rather than laboriously closing the gallery and then opening the editor, the image itself could appear to float above the apps and simply shift into the second app, which is already open to the editing pane. Developers can also add the illusion of depth by adding "elevation" which automatically stacks visual elements appropriately and adds drop shadows. Of course, if the only new thing was a face-lift, it wouldn't be all that exciting. But there are also plenty of new features. Not that there was anything wrong with notifications in KitKat, but there's always room for improvement. In L, you'll be able to interact with notifications, right from your lock screen. That can include quickly swiping them away or double-tapping on the notification to head straight into the relevant app. The notifications aren't ordered simply chronologically anymore either; they're sorted by relevance and importance, which is determined by a number of details, like the source app, etc... For truly important events, Google has introduced heads-up notifications, which pop interactive notifications over your current task. In a demo, an incoming call showed up at the top of the screen while Dave Burke, director of engineering for Android, was playing a game. He could simply ignore the pop up completely, or he could tap the options to accept or dismiss the call.

Obviously, if you have a secure lock screen, it might be a little tough to actually get excited about those notifications. But L will also introduce Trusted Environments, which allow you to access the phone without the hassle of pattern or PIN codes, but still leave you feeling secure that your data won't be accessible to others. The authentication can come in many forms. For instance, it could be connected to your fancy new Android Wear watch. When the phone is within a foot of your G Watch or 360, it would function normally. But if it moved beyond that distance, it could automatically batten down the hatches to keep ne'er-do-wells out.

One of the more intriguing changes is the deeper tie to the web and Chrome. The new recents interface will pull in not just apps you've launched, but also tabs you've opened on your desktop. And, developers can make links go to apps instead a web page. So, if you search for a restaurant on your laptop, the recent menu won't simply open up a web page, but could launch directly into the Yelp reviews.

Then there's the ART runtime, the software library that actually makes all your pretty little apps work. ART brings a whole bunch of advantages: Apps should run significantly quicker, and in particular, they should launch much faster. It should also increase battery life because Android will be wasting less processing power decompressing apps. ART is also built to support 64-bit mobile chips that are just starting to hit the market. Those processors, combined with the proper software support, should bring additional performance enhancements and power savings. And, if you still find yourself wishing for a longer battery life, there's a new battery saver mode than can extend standby time by up to 90 minutes by turning off unessential services.

L is also where Google is making a serious push into enterprise by embracing the bring-your-own-device culture. There will be new APIs specifically designed to allow personal and work data to live side by side with minimum inconvenience. But Google will also package these features as standalone apps; this way even users still on KitKat in a few months will be able to take advantage. The security and enterprise tools are actually built on Samsung's Knox tech, which is officially part of the Android OS now.

Most importantly though, Android L is where Google's OS finally fulfills its promise of being everywhere. That means wearables, cars and TVs -- pretty much everywhere you could want access to Android's deep well of applications and voice controls. Developers will get access to L soon, but sadly there's no word yet about when it might come to consumers.

In this article: android, breaking news, google, googleio2014, io2104, material design, mobilepostcross, poll, wedgies
All products recommended by Engadget are selected by our editorial team, independent of our parent company. Some of our stories include affiliate links. If you buy something through one of these links, we may earn an affiliate commission.