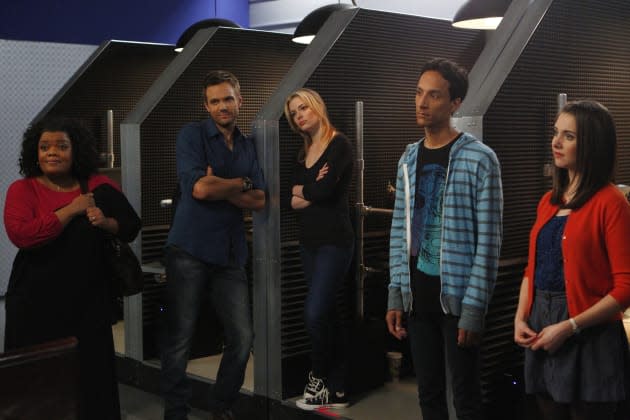 Six seasons and a movie. That's what fans of Community want, and they're very close to getting it. NBC cancelled Dan Harmon's comedy after its fifth season on the network -- one that may have already owed its existence to streaming services -- but now Yahoo has announced it's commissioning a new 13-episode season. There had been rumors/wishes that Community would return on an online network like Hulu, Crackle or Netflix, but The Wrap reports the cast's contracts were due to expire on Monday, so Sony Pictures needed to make a deal and Yahoo is looking for content (Firefly fans, update your mailing lists). With the exception of the previously departed Troy (Donald Glover) and Pierce Hawthorne (Chevy Chase), the main cast is onboard all the way down to Jim Rash as Dean Pelton. The season will be exclusive to Yahoo Screen, but details like how much it will cost to watch (if anything) or how the episodes will be released are still unclear. The one problem we hope Yahoo can solve right away? Where to put October 19th.

Update: In a TV Guide article explaining how Community got to Yahoo Screen (tl;dr: cash money -- the $2 million per episode budget will remain the same from its run on NBC, which Hulu couldn't match), exec Kathy Savitt says the plan is for it to be ad supported, and episodes will be released on a weekly basis.

It's been so long since I've seen the young maiden. My love is stronger than my fear of death. #SixSeasonsAndAMovie

Thanks for saving Community, Yahoo! I knew that having five different email addresses with you would pay off someday!

It's all because of the fans. The love you have for #Community knows no bounds. And we love you right back. Chang The World.

More college! Thanks to all the people who made this happen. #CommunityLivesOn *photo courtesy of my daughter pic.twitter.com/JmqYa7UKiv

In this article: community, danharmon, hdpostcross, nbc, sixseasonsandamovie, sonypictures, yahoo, YahooScreen
All products recommended by Engadget are selected by our editorial team, independent of our parent company. Some of our stories include affiliate links. If you buy something through one of these links, we may earn an affiliate commission.