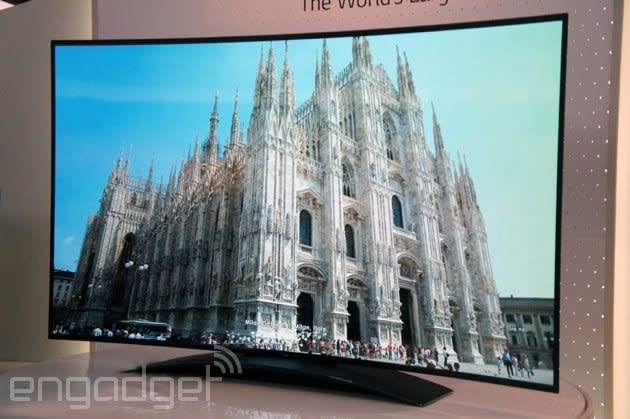 How much would you fork out for a 77-inch, curved, 4K, OLED TV? Well, LG hopes you're hovering around a couple of grand per descriptor, having announced it's launching such a gogglebox in the UK for only £20,000. It won't actually be available until October, though, so you still have a few months to fill up the piggy bank. As you'd imagine, the "world's first" curved OLED UHDTV packs a ton of branded technologies that promise a perfect picture, including the necessary upscaling engine that converts lower-res video to "near-4K," as well as LG's webOS smart TV platform. For the thrifty, there's a 65-inch model also launching in October for a mere £6,000, which you should easily be able to scrape together from the change lurking between your sofa cushions.

In this article: 4k, 4ktv, 65EC970V, 77EC980V, curved, curvedoled, lg, oled, uhd, uhdtv, UltraHighDefinition
All products recommended by Engadget are selected by our editorial team, independent of our parent company. Some of our stories include affiliate links. If you buy something through one of these links, we may earn an affiliate commission.