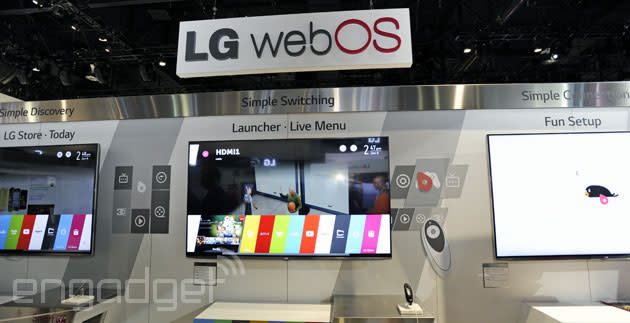 Since LG informed the world that webOS is coming to 70 percent of its smart TVs this year, naturally we were keen to take it for a spin. So, when they offered to let us take it for a spin, and have Director of Product Management Colin Zhao and Head of Product Management and Design Itai Vonshak walk us through the new UI, we jumped at the chance. And, not only did we get to see it in action, we also learned a bit about the philosophy behind LG's move to webOS on the big screen.

For folks thinking LG's version of webOS might favor its prior mobile implementation, think again. While the underpinnings are the same, the card-based UI has been ditched -- according to Vonshak "content is king on the television, and we didn't want to pull the user out of the viewing experience" by dumping them into an all-card view. When you hit the home button on the remote, you're greeted by a rail of parallelogram-shaped colorful icons at the bottom of the screen overlaid on top of whatever you're watching. Those icons include a Today recommendation engine (provided by an unnamed third party) that shows content popular with the viewing public, plus any and all content sources available to the TV, be it online video, localized media, live TV, gaming console or media streamer. Naturally, Netflix is red, Hulu is green, Roku is purple and so on. As you'll see in our video below, navigate the menu to the left and you're greeted by panes that show your viewing history. Slide to the right within the menu and you'll see the rest of your video sources that couldn't fit on the home screen. Speaking of, that home screen comes with a preselected set of apps, but it's completely customizable by the user. 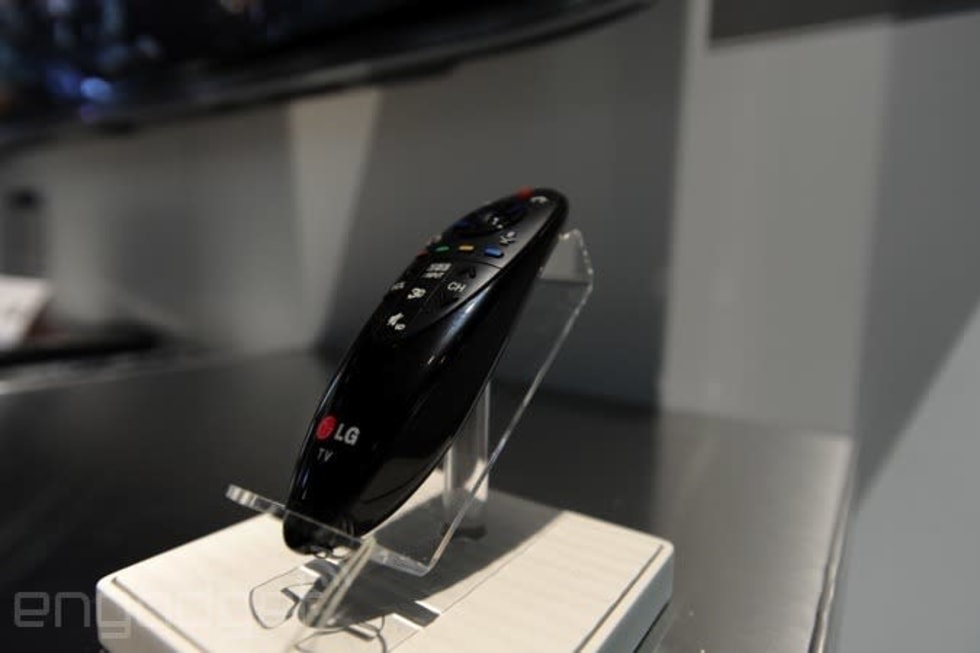 Navigating among the icons is fast and easy, and the LG TV swapped sources without issue. "We wanted to treat the web like a first-class, not second-class citizen," said Zhao. The aim is to provide an equally enjoyable user experience regardless of where content comes from -- and from our limited demo time, we'd say that LG is on the right track. This seamless and simple switching among content is one of the three guiding principles in designing the UI. Along with switching, setup and discovery are the other two.

We already mentioned the Today recommendation engine, and it is the main way that LG's discovery principle has taken form, but it's not the only method for discovery. When hovering over the icons for various streaming services, the screen automatically populates screenshots from popular content they provide -- rolling over Netflix, for example, caused a picture of the cast of House of Cards to fill the screen.

LG has taken an interesting approach in helping customers set up its new smart sets -- it's attempting to make the process entertaining. To do so, LG created a series of cute cartoon shorts featuring a little black avian character called Beam Bird. The system alternates between screens for setting up WiFi connections and streaming accounts and the aforementioned shorts. While we only got to witness a video cut together showing the process, we imagine that the cartoons will definitely appeal to many. And even for folks who aren't super keen on the idea, Vonshak assured us that the bird will only appear at setup, and they've kept the cartoons short enough to avoid user fatigue: "We didn't want Beam Bird to turn into Clippy."

We didn't get to spend a tremendous amount of time using this new version of webOS, but we did see enough to say that Zhao and Vonshak are definitely on the right track. In fact, we'd say it's the best smart TV UI we've ever used.

In this article: ces2014, hands-on, hdpostcross, lg, smarttv, TV, video, webos
All products recommended by Engadget are selected by our editorial team, independent of our parent company. Some of our stories include affiliate links. If you buy something through one of these links, we may earn an affiliate commission.