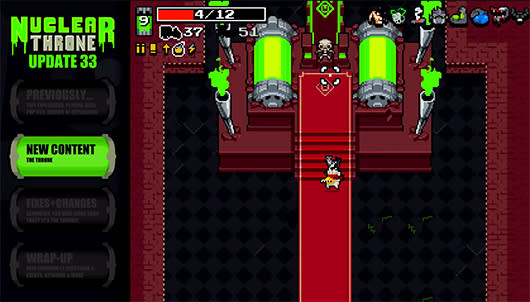 According to the developer, the throne can be found at the game's climax, after players have battled their way from a lowly campfire, through the wilds, into the Palace, and past its many opulent, yet deadly foes. As you can see at the 2:50 mark of the above video, once you arrive in the nuclear throneroom, you'll find the throne occupied by a skeleton. Blast that pile of bones into dust, and you're faced with the game's final boss, the throne itself.

Though the showdown with the throne marks the end of the game, Vlambeer claims it's only halfway through development on Nuclear Throne. Vlambeer offers no solid release date for Nuclear Throne, but reiterates that the game will appear on PC, Mac and Linux, before arriving on the PlayStation 3, PlayStation 4 and Vita platforms. If you'd rather not wait, you can try Nuclear Throne's Early Access version on Steam or by visiting the Humble Bundle website.
[Image: Vlambeer]
In this article: mac, nuclear-throne, pc, playstation, playstation-vita, ps3, ps4, vita, vlambeer, wasteland-kings
All products recommended by Engadget are selected by our editorial team, independent of our parent company. Some of our stories include affiliate links. If you buy something through one of these links, we may earn an affiliate commission.