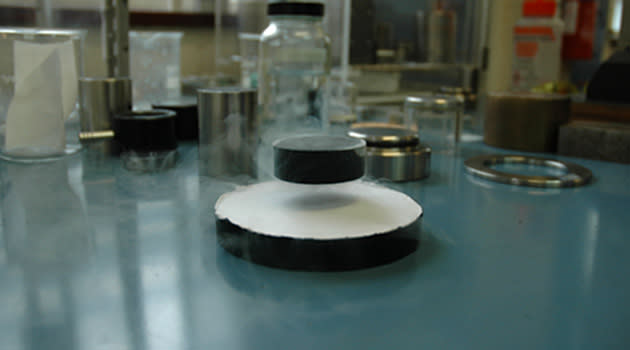 University of Cambridge scientists have broken a decade-old superconducting record by packing a 17.6 Tesla magnetic field into a golf ball-sized hunk of crystal -- equivalent to about three tons of force. The team used high-temperature superconductors that work at minus 320 degrees F or so -- not exactly balmy, but less frigid than the minus 460 degrees F needed for regular superconductors. With zero resistance, superconducting materials can carry up to 100 times more current than copper wires, but the resulting magnetic fields create huge internal forces. Since the cuprate materials used for the record are as fragile as dried pasta, they can actually explode under the strain. To get around it, the team modified the material's microstructure and "shrink-wrapped" it in stainless steel. That produced the largest magnetic field ever trapped in a standalone material at any temperature, according to the team. The research might eventually lead to more secure and efficient power transmission, better scanners and yes, levitating monorails.

In this article: Cambridge, MagneticFields, Record, Superconductor, University of Cambridge
All products recommended by Engadget are selected by our editorial team, independent of our parent company. Some of our stories include affiliate links. If you buy something through one of these links, we may earn an affiliate commission.