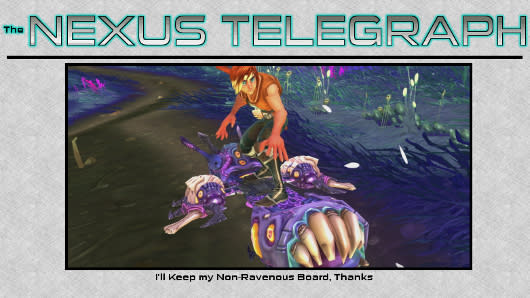 The funny thing about launches is that they're like every other aspect of the game industry: They're based on momentum. Create the feel that you're coming out with new content on a quick basis and you get points from players, even if it's inevitable that some of this content is stuff that was almost-but-not-quite ready for launch and just had to be trimmed back a little before we first got to dip our toes in the official swimming pool. You can see the zones on your map in WildStar right now, even.

Does it matter to me? Nope. I have to admit it doesn't. I'm satisfied.

The bulk of the news this month has been about the game's first major patch, which is due for "early July" without a harder date. I have not yet gotten to go hands-on in this content; I've been too busy focusing on the live game and advancing there (up to 50 on one character, at least!), but let's talk a little bit about what's being added in the patch. Fair warning: Spoilers may ensue.

I'm kind of surprised that first thing we're getting out of the gate is a lot of Strained-themed stuff that is, well, cosmetic. Seriously, I can't imagine the Strain costume we've seen marching around is going to be limited to armor weight; that's purely visual. Ditto the Strain housing plugs and decorations, as vile and infected as you could like to see. New dyes, new emote, a hoverboard that looks like it'll threaten to eat you and/or your cat...

I'm happy, so don't get me wrong, but I had honestly expected "here's all the new gear with larger Brutality bonuses" to be the operating theme. We've slogged through years of that being standard operating practice in other games. We've been told about new and more powerful equipment only a few times. It's a distinction I quite like.

At a glance, this update will feature some of that, but not exclusively and perhaps not even primarily escalating power. I imagine a lot of these new cosmetic bits are locked behind either challenges or reputations, just waiting for people to work up if they're more interested in the non-progression side of the game. I certainly hope so, as no one enjoys being shown something that only a small portion of the playerbase will even have a chance to get.

Of course, that's also assuming that you're not tired of looking at this particular shine as it is. Blighthaven's stylings appear strongly reminiscent of Grimvault, the zones I've spent most of my upper levels cleaving my way though. One of the great things about the game is that by and large no two zones look quite the same, but these kind of do. Hopefully this is going to serve as a proper conclusion rather than the same sort of tease we've seen in the story up until now.

With any luck, we're also looking at a story to finish out the plot of the Genesis Prime and associated Drusera discussion. What's maddening about the story instances in the current game is that they stop just shy of stating the connections between Drusera, the Entity, the fate of the Eldan, the Strain, and so forth. I'm hopeful that this drop is confirmation of what seems to be the case rather than yet another dose of mystery that you can probably figure out for yourself.

The promise of open-world group instance-ish stuff is both welcome and brings to mind some of the more horrible points of early World of Warcraft, in which players were trying to navigate a group through zones filled with elites. Then again, WildStar already flirts with this sort of content in parts of Grimvault, so I can't help but hope that lessons were being taken.

The Strain drop seems to be rather well timed. I currently don't see a lot of people at level cap; there's the small crop that power-rushed to the end, and then there's a slow number of people reaching it now compared to a larger tide building behind us. Most of the people I know and see playing are getting there but aren't there just yet. It seems as if early July will be... well... around the right time for the max-level population to start really fleshing out.

Clever? Yes. If balanced properly, this alone could be a decent content cadence, hitting players just as they're reaching milestones without any temporary content that you have to worry about missing. Not that there's another cap to hit, of course, but there will be more gems to get and the like. Amidst all of this, the Northern Wastes seem to be almost an afterthought. They're there, certainly, but they really seem off to one side -- unrelated to the Strain, unrelated to the bulk of the Eldan stuff, unrelated to almost everything. Obviously there's a lot there to be done by players as well, but one has to wonder what the distinction is between what the Wastes are offering and what Blighthaven has instead.

My suspicion -- and this could be true or false -- is that Blighthaven is full of cosmetics and lore for the solo player but not a whole heck of a lot else. That open-world group content and such is where all of the loot lies, and while you can get plenty of decorative bits there, you won't be getting more powerful. By contrast, what we've heard of the Wastes specifies lots of quests and loot, implying that it's more of a solo power trip rather than a cosmetic farm.

Of course, that's just speculation. It could be just two separate zones. Who knows?

Either way, it's a nice addition to the game for pretty much anyone other than the players sick of the two existing PvP battlegrounds, and according to today's Devspeak, we're getting another one in the next patch. And that's awesome. I appreciate the team at Carbine Studios not giving us an exact date on the first patch and making a point to really push it out in short order, although hopefully that doesn't mean it's buggy. (High-level areas in the game now have a few of those darn bugs, you know.) Let's hear it for eyestalks everywhere.

Feedback, as always, is welcome in the comments below or via mail to eliot@massively.com. Next time around, I'd like to start talking about builds; if we're already full of Strain by then, I will touch upon it, but I already delayed that column for this, you know. Do let me know if people are interested in seeing my house in-game, incidentally. I can take video.

Here's how it is: The world of Nexus can be a dangerous place for a tourist or a resident. If you're going to venture into WildStar, you want to be prepared. That's why Eliot Lefebvre brings you a shiny new installment of The Nexus Telegraph every other Monday, giving you a good idea of what to expect from both the people and the environment. Keep your eyes peeled, and we'll get you where you need to go.
In this article: area, areas, backstory, carbine, carbine-studios, column, equipment, featured, first-patch, gear, loot, lore, ncsoft, news, news-items, nexus, nexus-telegraph, opinion, patch, patches, region, regions, sandpark, sci-fantasy, sci-fi, strain, strain-patch, strain-ultra-drop, the-nexus-telegraph, upcoming-patches, visuals, wildstar, zone, zones
All products recommended by Engadget are selected by our editorial team, independent of our parent company. Some of our stories include affiliate links. If you buy something through one of these links, we may earn an affiliate commission.