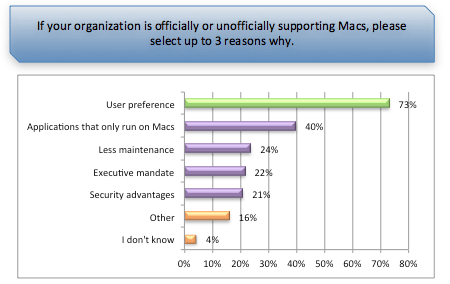 Today VMware announced the results of a company commissioned survey of 376 IT professionals to access the current state of enterprise desktops. The survey was conducted by Dimensional Research with the goal of capturing hard data on Apple device usage in the workplace, and to quantify the enterprise readiness of Macs.

The results of the report, titled "The Apple Enterprise Invasion," shows that Windows is no longer the platform of choice in the enterprise, with users overwhelmingly preferring Macs. User preference is the top reason given by IT administrators as to why their organization supports Macs with 73 percent of IT administrators identifying it as the main driver.

There is still progress to be made however when it comes to Mac's enterprise future. 64 percent of surveyed IT administrators said that only some or none of their enterprise applications were currently ready to run on Macs. One possible solution presented by the VMware survey is a virtual desktop which could bridge the gap between Linux PC, Mac, and Windows PCs. 91 percent of surveyed IT administrators stated such a set up would be valuable to their jobs.

You can read all of VMware's survey over at their blog.

In this article: enterprise, it, Mac, survey, vmware
All products recommended by Engadget are selected by our editorial team, independent of our parent company. Some of our stories include affiliate links. If you buy something through one of these links, we may earn an affiliate commission.