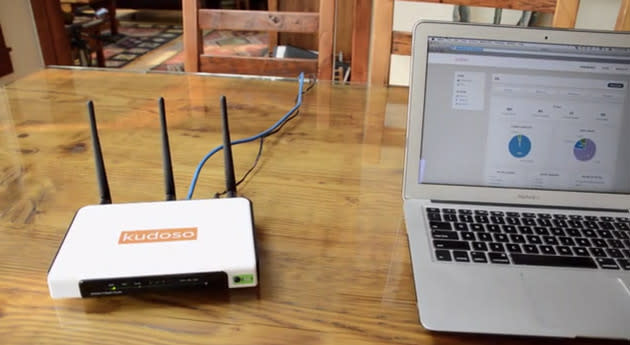 It's easy to spend an inordinate amount of time on the internet, and understandably parents would rather their children didn't grow up permanently glued to a screen. Stripping their hands of tablets and computers is one way to impose down-time (and/or incite a tantrum), or you can go the positive reinforcement route and swap screen time for good deeds. This is where Kudoso's router software for managing your family's internet habits comes in. On top of standard parental controls for keeping your little ones away from some of the darker corners of the web, Kudoso lets you set tasks for your children that are worth points with which they can buy internet time.

You set these through Kudoso's web interface, as well as confirm when an activity has been completed. In this way, kids accumulate currency to spend visiting any sites you've authorized. Some can be more expensive than others, too, so an hour of Facebook access might be twice the price as the same amount of time on YouTube, for example. Kudoso is also integrated with free education portal Khan Academy, allowing your children to accumulate points by dedicating some screen time to academic endeavors. Currently seeking $50,000 of crowdfunding cash through Kickstarter, the team behind Kudoso later plan to plug FitBit data into the software for measuring activity-based tasks, if the campaign's stretch goal is hit.

A pledge of $89 will buy you the Kudoso software, but it's only compatible with a small handful of existing routers. Add another 30 bucks, however, and you'll receive a Kudoso router with the software pre-installed. And, if you don't have that kind of cash to spare, then don't worry -- we won't tell anyone if you hijack the concept and create a crude spreadsheet version of your own.

In this article: crowdfunding, kickstarter, kudoso, ParentalControls, router
All products recommended by Engadget are selected by our editorial team, independent of our parent company. Some of our stories include affiliate links. If you buy something through one of these links, we may earn an affiliate commission.