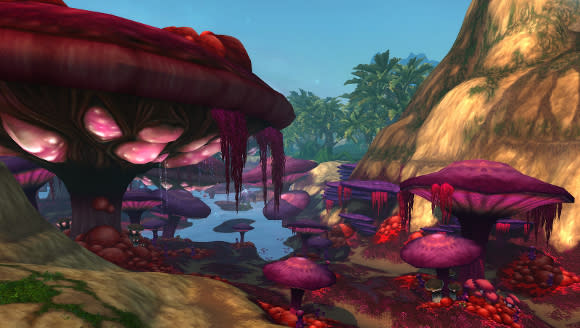 It's finally starting to get uncomfortably warm here in southeast Wisconsin ... and my air conditioning breaks. Awesome! Let's do this thing anyway.

Will the Adventuring Supplies vendors that sold the lower ilvl green gear return in WoD?

I haven't seen one yet, but I think it would be wise of them to include one if they don't have an alternative planned. The issue with newbie zones in expansions is players come from a wide range of gearing backgrounds -- people who have been raiding in the previous expansion will one-shot everything in the opening zone of the new expansion. People who are still wearing greens will struggle for awhile. Setting some kind of baseline just makes sense. Let the raiders continue to be awesome. Bring the others up a little bit.

While questing in Zangarmarsh within an area known as The Dead Mire to the Northeast of the zone I stumbled upon a large serpent statue buried halfway in mud. It looks very similar to serpent statues of the trolls in Azeroth. I don't believe it belongs to the Naga since they arrived fairly recently to Outland when they helped Kael'thas to open a portal to Draenor and followed through with him and Illidan.

The mystery deepens ... The area that this is in seems to be one of the first lakes that the Naga have drained in their hopes to make another Well of Eternity. Well, at the bottom of this now dry lake bed is a large skeleton. The skeleton seems to be that of either a large dragon or a large wind serpent.

Any ideas of what all this is?

The easiest explanation? The devs doing environment design simply plugged in doodads that look neat, using resources from vanilla Azeroth and not paying much mind to consistency with Outland. If we want to come up with a better explanation, they could be relics from what Draenor used to be -- the one closer to what we'll be seeing in Warlords. The orcs might have made those statues but abandoned the region after the planet was broken into pieces. Perhaps the eels of the area were much larger a long, long time ago, and the skeleton belongs to one of those.

What other animals do we not yet have available as battle pets that you'd really, really like to see? For me? (aside from ridiculously floofy persian / ragdoll / maine coon inspired housecats) I really want a capybara minipet. Because capybara.

Anything but kangaroos. Seriously. Anything. Kangaroos freak me right the hell out. They are horrors of evolution, like many of Australia's critters.

Hey Wowinsider! Can you like, stop with the full-page ads I've been forcibly forwarded to lately whenever any link on the page is clicked? It's really really really very much annoying, and I'm sure I shall stop visiting pretty soon if this keeps up for much longer.

If you're continuing to get an ad like this, can you screenshot it and email it to us? We aren't running any ads like that as far as I know. And I haven't heard anyone else mention it. I have a suspicion it might be your browser doing it, but I'd like to see it myself and follow up before I claim something like that with certainty.

If it's us, I'll look into it, but I'm genuinely unaware of WoW Insider running anything that pops up after clicking away from our page.

I was soloing Black Temple, and I noticed that Illidan was holding a skull. Whose is that? Or is it there for dramatic effect?

It's the Skull of Gul'dan. Illidan sucked magic out of it to gain that half-demon form you see him use in Black Temple. Our Know Your Lore on Gul'dan may interest you.

Have questions about the World of Warcraft? The WoW Insider crew is here with The Queue, our daily Q&A column. Leave your questions in the comments, and we'll do our best to answer 'em!
In this article: adventuring-supplies, featured, guldan, skull-of-guldan, warlords-alpha
All products recommended by Engadget are selected by our editorial team, independent of our parent company. Some of our stories include affiliate links. If you buy something through one of these links, we may earn an affiliate commission.