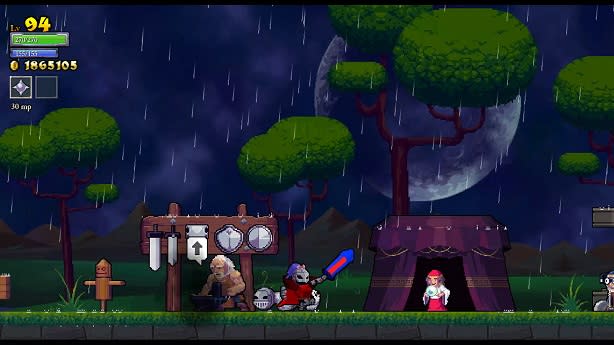 Cellar Door Games' 2D descendant-dependent game Rogue Legacy will arrive later this month for PS4, PS3 and Vita. The game is scheduled to arrive in North America on July 29 and one day later in Europe. The game reached PC just over one year ago, followed by Mac and Linux in October. The PlayStation versions of the game, most of which is courtesy of Abstraction Games, were revealed during Sony's Gamescom press conference in August.

Rogue Legacy is described as a "rogue-lite," as players battle through a constantly-changing magic castle at the risk of losing their progress at the drop of a blade. Upon dying, the child of the fallen hero/heroine rises in succession, each time carrying a genetic trait (and their parent's money) that makes the next attempt unique. The PS4, PS3 and Vita versions will be Cross-Save enabled, so players can carry their progress across each platform. They will also be Cross-Buy-capable, putting one price to all three versions, which has not yet been revealed.
[Image: Cellar Door Games]
In this article: cellar-door-games, cross-buy, playstation, playstation-vita, ps3, ps4, release-date, rogue-legacy, roguelike, vita
All products recommended by Engadget are selected by our editorial team, independent of our parent company. Some of our stories include affiliate links. If you buy something through one of these links, we may earn an affiliate commission.