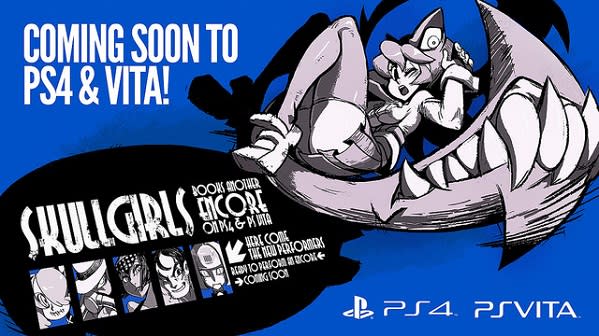 Lab Zero revealed Skullgirls Encore is set to make another encore, this time on PS4 and PS Vita. The reborn edition of the 2D fighter is due to arrive later this year, with all Indiegogo-funded DLC characters, stages and story content included. Additionally, the Vita version works on PlayStation TV with local multiplayer support for two DualShock 3/4 controllers.

Lab Zero said it'll have more info on features and pricing info closer to launch - that includes if the PlayStation ports have cross-buy and/or cross-save support. In the interim, players on the game's current platforms can look forward to receiving the third free DLC character, Eliza, later this summer. For an early look at the imperious Egyptian, check out Lab Zero's work-in-progress video below the break.
[Image: Sony Computer Entertainment]
In this article: lab-zero-games, microsoft, pc, playstation, playstation-vita, ps3, ps4, skullgirls, Sony-Computer-Entertainment, vita, xbox
All products recommended by Engadget are selected by our editorial team, independent of our parent company. Some of our stories include affiliate links. If you buy something through one of these links, we may earn an affiliate commission.