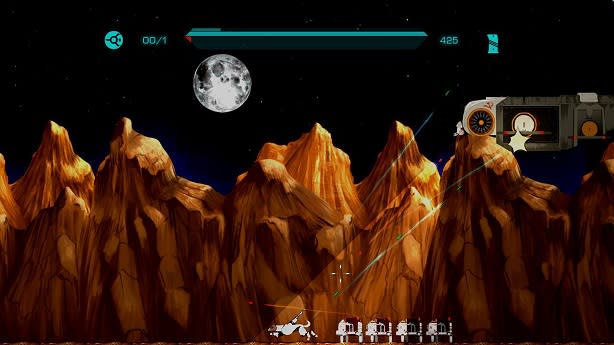 The latest group of games, 75 in total, have been granted distribution on Steam thanks to the approval of the Greenlight community. Included in the newly-picked games is The Sun at Night, Minicore Studios' run-and-gun game that stars Russian space dog Laika. The game first launched in February and is the first of three parts in the series. The second chapter, The Sky Below, is slated to arrive in October and will incorporate feedback from The Sun at Night into it.

Also approved for Steam is Ojtam Games' horror adventure game Bulb Boy. Inspired by Amanita Design's Machinarium and Sierra's 1991 adventure game Gobliiins, Bulb Boy stars a lightbulb-like boy that wakes from a nightmare to find his "Grandparaffin" and "Mothdog" missing. The game is currently raising funds to wrap its development via Kickstarter, seeking $40,000 by July 27, of which it's earned just over $7,500 as of this writing.
[Image: Minicore Studios]
In this article: bulb-boy, greenlight, laika-believes, minicore-studios, pc, STEAM, steam-greenlight, the-sun-at-night
All products recommended by Engadget are selected by our editorial team, independent of our parent company. Some of our stories include affiliate links. If you buy something through one of these links, we may earn an affiliate commission.