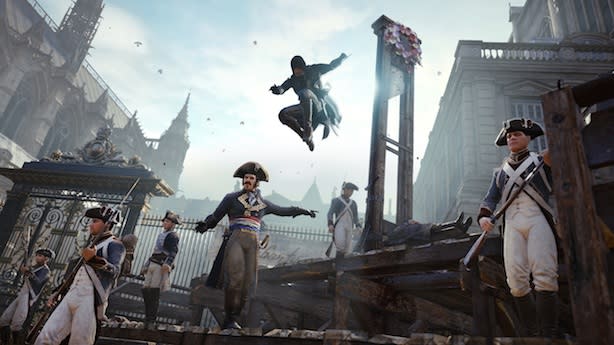 It's 18th Century Paris, and you're Arno, a master assassin, sneaking through the thick of the French Revolution. Your parries, knife throws, smoke bombs and spying have a direct impact on the future of France and its people - so don't mess it up.

Assassin's Creed: Unity features a co-op multiplayer feature, where friends can join you during the game's campaign to embark on a "brotherhood mission," Assistant Art Director Patrick Limoges told Joystiq.

Assassin's Creed: Unity is due out on October 28 for Xbox One, PS4 and PC. Pre-orders are live now, with two bonuses: Free spins on the Guillotine Wheel spin-to-win game (with prizes of trips, entertainment equipment, apparel and digital game content), and the Chemical Revolution mission.
[Images: Ubisoft]
In this article: assassins-creed-unity, microsoft, pc, playstation, ps4, Ubisoft, xbox-one
All products recommended by Engadget are selected by our editorial team, independent of our parent company. Some of our stories include affiliate links. If you buy something through one of these links, we may earn an affiliate commission.