'SportsNation' is making a comeback on ESPN+

The ESPN+ annual subscription is going up by $10 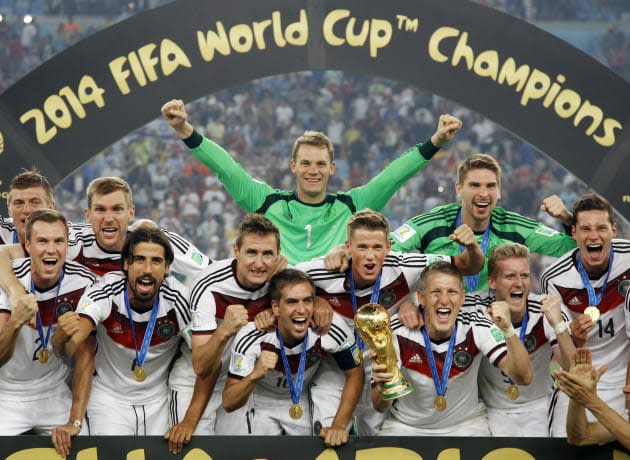 The numbers speak for themselves: This year's World Cup has been setting records all over the place. Not only did it keep folks in the US tuned into their team with services like WatchESPN, but who could forget the most tweeted-about sports game ever in that 7-1 thumping suffered by host nation Brazil -- Sad Brazilians, anyone? Yesterday's final, meanwhile, which ultimately saw Germany beat out Argentina for football's biggest prize, set great numbers for social media and TV networks alike. For its part, Facebook reports that the 2014 World Cup Final was the biggest sporting event in its history, with comments, likes and posts combining for over 280 million interactions. Twitter, on the other hand, says the match produced a total of 32.1 million tweets and, in the process, broke the record for any event with 618,725 tweets per minute.

As for the streaming front, Hispanic-focused network Univision had 456,408 unique viewers total on the Univision Deportes website and apps. To put this in perspective, the Mexico vs. Brazil Group Stage game nabbed 1.6 million unique viewers, though that was before Univision started requiring a cable login to use its service and, granted, included a team whose fan base speaks Spanish. Comparatively, ESPN revealed much better numbers through WatchESPN, scoring 1.8 million viewers for the final match. This, combined with the rest of the World Cup matches, made the event the most viewed in WatchESPN's history. Whether it was through Twitter, Facebook, ESPN or Univision, it's safe to say FIFA made its mark Stateside, and globally, in 2014.

Oh, and how could we leave out this great selfie, courtesy of German world champion Lukas Podolski.

[Image credit: Associated Press]
In this article: ESPN, Facebook, FIFA, Football, hdpostcross, mobilepostcross, Soccer, Sports, Twitter, Univision, Univision Deportes, UnivisionDeportes, WatchESPN, World Cup, World Cup Final, WorldCup, WorldCupFinal
All products recommended by Engadget are selected by our editorial team, independent of our parent company. Some of our stories include affiliate links. If you buy something through one of these links, we may earn an affiliate commission.