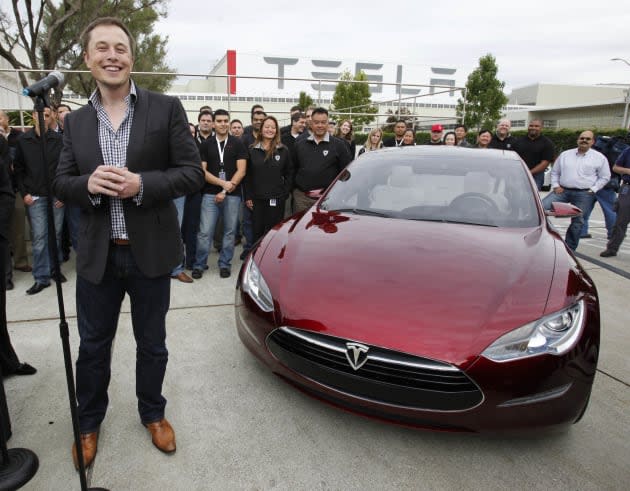 Tesla hasn't quite delivered its new Model X SUV yet, but at least we have a name for its first electric vehicle pointed at the mainstream. In an interview with AutoExpress, CEO Elon Musk (pictured above with an old Model S prototype) revealed it will be called the Model 3 (with three bars to represent it), after Ford put the kibosh on calling it the Model E. Musk has repeatedly targeted 2017 as the release window for a smaller $35,000 vehicle. He's said it will be the third generation after the original Roadster and Model S, and in the interview claims it will have a range of over 200 miles per charge, probably using batteries built in Tesla's planned Gigafactory. Musk also told the mag about a range boost upgrade coming for the original Roadster that will give it a modern battery capable of going up to 400 miles on a charge, "which will allow you to drive from LA to San Francisco non-stop."

Confirmed: Our Gen III car, due out after Model X, will be named Model 3. http://t.co/PLhUzycSlp pic.twitter.com/noZf17LXre

FYI, the Model 3 images used by @AutoExpress were mock-ups based on their own speculation.

In this article: breaking news, culture, elonmusk, gear, green, model3, modeliii, poll, roadster, tesla, timeline16ecocarrange, transportation, wedgies
All products recommended by Engadget are selected by our editorial team, independent of our parent company. Some of our stories include affiliate links. If you buy something through one of these links, we may earn an affiliate commission.