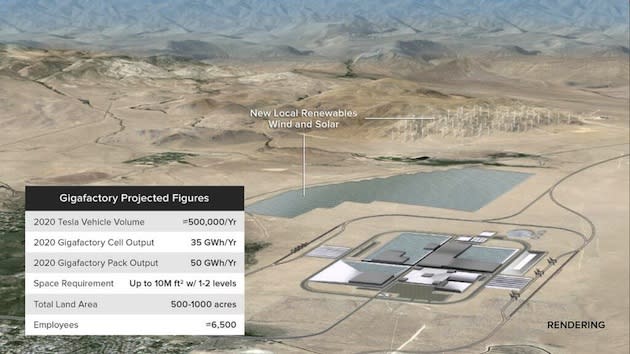 If you've been dreaming of a Tesla but can't afford a Model S and its $70k+ sticker price (before tax credits), the company is announcing a major step towards building an electric vehicle in your price range. CEO Elon Musk has targeted 2017 for building a vehicle that costs half that, and has released details (PDF) of the "Gigafactory" he expects to have building batteries by then. The company predicts that by 2020, it will pump out more batteries alone than the world manufactured in 2013, keeping prices down while Tesla ramps up production on the unnamed "Gen III" vehicle.

To do that, it's raising $1.6 billion from a group of investors -- rumors suggest Model S battery provider Panasonic could be in for as much as $1 billion -- in a pair of bond offerings, with an option for an extra $240 million. The plant isn't built yet of course, but Tesla has pointed out four southwestern states (Arizona, New Mexico, Nevada or Texas) as possible locations, ideal for its solar and wind renewable energy plans. The plant will lower costs by working on the raw materials, cells, modules and battery pack enclosures all in one place, employing as many as 6,500 people.

Check out some details about what the Gigafactory will look like: http://t.co/L90AIYv8R8 pic.twitter.com/i5mEwMjFKA

In this article: battery, electricvehicle, ev, gigafactory, panasonic, tesla
All products recommended by Engadget are selected by our editorial team, independent of our parent company. Some of our stories include affiliate links. If you buy something through one of these links, we may earn an affiliate commission.