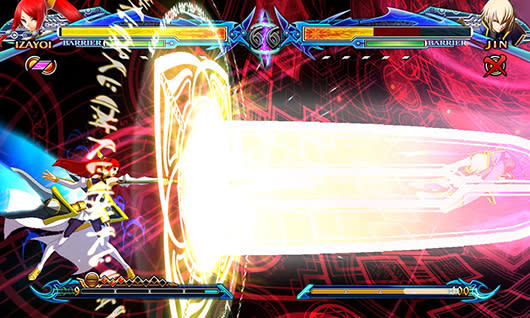 Forget the World Cup, this weekend's most thrilling competitive drama took place at the Evo 2014 fighting game tournament. Specifically, in the BlazBlue: Chrono Phantasma finals between Garireo and Dogura.

Coming into the finals, Garireo was fighting out of the losers bracket, meaning he needed to win two straight best of five matches, while Dogura only needed to win one. Garireo barely squeaked by in the first match, winning 3 to 2. Garireo then lost his first two battles in the second match, leaving him moments from elimination, before he managed an impressive three-win streak to take home the championship.

Above, you'll find footage of the finals in its entirety. Below, footage of Garireo and Dogura during the last battle. If you're allergic to people's dreams being crushed in undeniably spectacular fashion as a rabid crowd goes nuts in the background, you may want to skip the second clip.
[Image: Arc System Works]
In this article: arc-system-works, blazblue-chrono-phantasma, dogura, evo-2014, garireo, playstation, playstation-vita, ps3, vita
All products recommended by Engadget are selected by our editorial team, independent of our parent company. Some of our stories include affiliate links. If you buy something through one of these links, we may earn an affiliate commission.