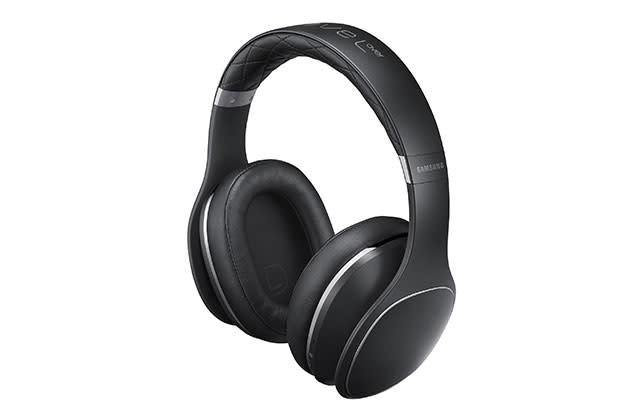 We were privy to Samsung's premium portable audio plans a few days before the rumblings of an Apple/Beats affair surfaced. The Level series of portable audio gadgets goes on sale tomorrow (July 17th) with appropriately-named options for over-ear, on-ear, in-ear and Bluetooth speaker listening -- covering the same bases as Dr. Dre's outfit. Level Over, the set of over-ear cans, is the priciest of the lot, asking $350 for its active noise cancellation, on-board controls, wireless connectivity and stitched leather-esque accents. There's also a Level App that's designed to tune the set to the environment or content you're consuming. As evidenced by their monikers, the Level On and Level In are the on-ear and in-ear entries, priced at $180 and $150 respectively. For those who prefer a wireless speaker, the $170 Level Box packs one-touch NFC or regular ol' Bluetooth pairing for its 15 hours of service. Unfortunately, we're waiting to judge the group with our own ears, but you can rest assured we'll offer up detailed observations when we do. The entire line goes on sale at Gilt.com tomorrow, with Amazon, Samsung.com and Best Buy's Samsung Experience Shops stocking them all before the end of next week.

20
In this article: audio, bluetoothspeaker, headphones, samsung, samsunglevel, samsunglevelbox, samsunglevelin, samsunglevelon, samsunglevelover
All products recommended by Engadget are selected by our editorial team, independent of our parent company. Some of our stories include affiliate links. If you buy something through one of these links, we may earn an affiliate commission.