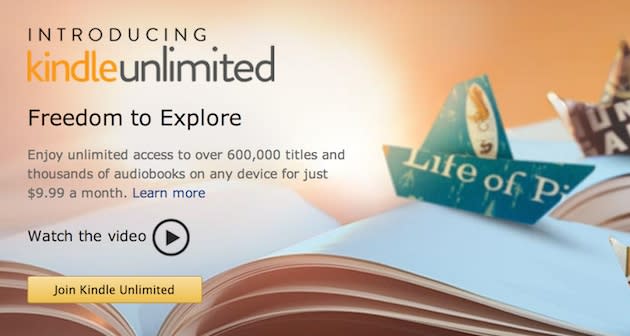 After teasing us with a possible launch, Amazon has confirmed Kindle Unlimited, its all-you-can-read e-book subscription service. For $9.99 per month, Kindle Unlimited offers 600,000 books and "thousands" of audiobooks across a range of devices. As expected, many of the major publishers aren't fully represented, but there are number of popular titles listed, including Harry Potter, Lord of the Rings and the Hunger Games, as well as a whole catalog of Kindle exclusives. Like Prime, Amazon initially offers a free 30-day trial to draw you in, but it's also throwing in a three month subscription to Audible and access to 2,000 audiobooks via its Whispersync service (which lets you seamlessly switch between reading and listening whenever the mood takes you). For a service that bills itself as "unlimited," there's a few constraints on Amazon's Netflix-for-books service. In addition to the fact that it doesn't have the support from all of the major publishers, of course, there's also the small matter that it's only available in America. At least, for now.

Update: There was a video here from Amazon showcasing Kindle Unlimited, but playback of said video is disabled outside of YouTube. So! Here's a link to that video, in case you're wondering what happened. Sorry!

In this article: amazon, e book, e books, e reader, e readers, e-book, e-books, e-reader, e-readers, kindle, kindle unlimited
All products recommended by Engadget are selected by our editorial team, independent of our parent company. Some of our stories include affiliate links. If you buy something through one of these links, we may earn an affiliate commission.