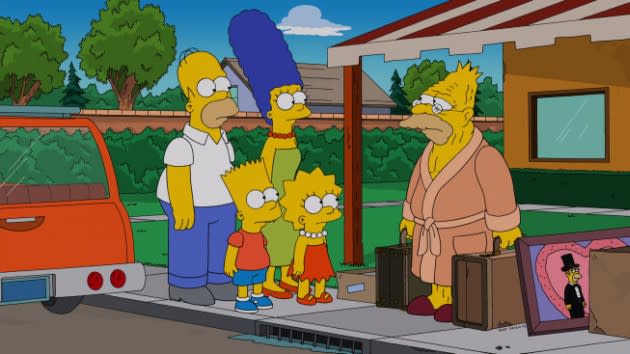 First, the good news: At its Television Critics Awards, Fox just announced the details of its plan to put every episode of The Simpsons online for streaming (also, Louie and Fargo have been renewed). Simpsons World will launch in October and let fans browse episodes, create their own playlists, search for/share clips and more. Before that, the FXX cable channel will run "the longest TV marathon in history" by airing the full 25-season / 552 episode run (just for reference, the first HD episode is S20E10, from 2009) in one shot, 24 hours a day, plus The Simpsons Movie, from August 21st until September 1st. The bad news? To access more than just clips, you'll need a subscription with a participating cable provider. Simpsons World will live both on the web, and through the FXNow app on iOS, Android, Xbox and other smart TV platforms. From those in attendance, like Max Follmer of Brief, the app sounds very well put together, and will let fans do things like follow along with the script as it was originally written and immediately share quotes.

In this article: fox, fxx, hdpostcross, marathon, simpsonsworld, thesimpsons
All products recommended by Engadget are selected by our editorial team, independent of our parent company. Some of our stories include affiliate links. If you buy something through one of these links, we may earn an affiliate commission.