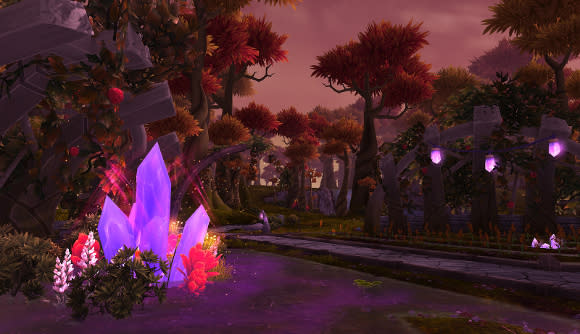 Look at that crystal. That's a nice crystal.

Got into the beta last week, and was amused when the in game text popped up "awesome in game cinematic" was less amused when I didn't get to see the cinematic. Is this typical during betas?

Yes. The cinematic doesn't exist yet. The text you saw was a placeholder. For some companies, the beta testing phase for their games is mostly feature complete, and they're only doing late-phase testing. In World of Warcraft betas, the earlier you get in, the more obvious it is you're playing something where the content is actively in development. In the earliest stages of the alpha, there was only one zone available for play and it was super unfinished. You saw all there was to see in a couple of hours.

do we know if Tanaan Jungle is going to be an open zone that we can explore with quest hubs spread out over it? Or is it going to be limited to just the intro quest chain and then you get ported out to SMV or Frostfire Ridge? In the beta it feels like you rush through there on your single quest path and you don't get to explore it much. I'd really like to be able to do and see more there.

I believe the Tanaan Jungle intro experience shows only a small portion of the zone -- the Dark Portal and the tribal war camps in its immediate vicinity. Tanaan Jungle is a much larger place beyond that. Tanaan Jungle is what was once Hellfire Peninsula, so it would be weird if all we ever saw of that zone was a small circle around the Portal. It's a fairly significant location.

Who would you like to hear voice acting a character?

Do we have any idea what the armour items are in the Character Creation screen if someone wanted to use them for Mogging?

If I recall correctly, those armor sets don't even exist in-game. Death knights and (I think) monks use their actual starter armor, but every other class wears a fake armor set on the character creation screen. They were created just for that screen. Frankly, I find that a little misleading. I understand they want the armor on that screen to represent the motif for each class, but you don't start with that stuff and you can't even get it later. Some of the sets slightly resemble the first dungeon set you can get in vanilla WoW's 5-man dungeons, but they still aren't the same.

It feels a bit like Blizzard is luring people into things on false pretenses.

what dose the scouter say about Khadgar's power-level?

have there been any new battlegrounds shown or talked about yet for Warlords of Draenor?

I don't think so. Their PVP focus seems aimed primarily at Ashran.

Have questions about the World of Warcraft? The WoW Insider crew is here with The Queue, our daily Q&A column. Leave your questions in the comments, and we'll do our best to answer 'em!
In this article: featured, warlords-beta, warlords-of-draenor-beta
All products recommended by Engadget are selected by our editorial team, independent of our parent company. Some of our stories include affiliate links. If you buy something through one of these links, we may earn an affiliate commission.