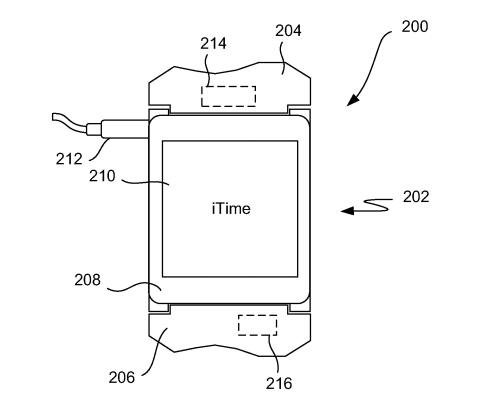 We don't typically publish Apple patent stories since, well, Apple tends to patent everything under the sun. But with the evidence mounting that Apple is working on a wearable device slated for release later this year, a newly discovered patent detailing an "iTime" smartwatch is worth highlighting.

Originally discovered by AppleInsider, Apple's iTime patent details a "wrist-worn electronic device" with its own touchscreen display and the ability to communication with other mobile electronic devices.

The patent description reads in part:

The description goes on to explain that once a notification is received, a user can select controls which enable him/her to "view additional information pertaining to the notification." One such example would allow users to accept or decline an incoming call via the wrist-worn device.

Some of the device's features include media storage and playback, GPS, an accelerometer, and a wireless communication transceiver built into the band itself.

The entire patent application, complete with feature descriptions and artist illustrations of the device can be found over here via the USPTO website. In this article: iWatch, patent, wearable
All products recommended by Engadget are selected by our editorial team, independent of our parent company. Some of our stories include affiliate links. If you buy something through one of these links, we may earn an affiliate commission.
Share
Tweet
Share